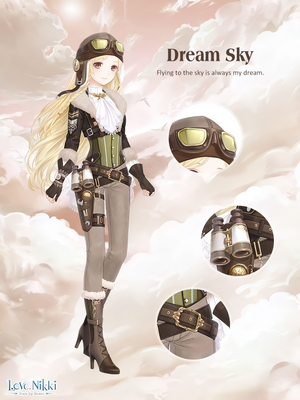 Flying to the sky is always my dream.

Dream Sky is a North suit that has a chance to drop by purchasing a Zodiac Lucky Pack.

The suit was once exclusive to the International server, but is now available on the Hong Kong/Taiwan/Macau and Indonesia servers.

At the age of 15 when Melia went onto the plane for the first time, she knows her life is to fly.
– Above Cloud

It's but a normal plane, but it has sharp red wings. Melia and her father devoted a lot to it.
– Dream Sky

Melia's father is too old for flight, but he often walks around the airport and looks for the red in the sky
– Legacy of Faith

Melia made a brave decision. She would fly across the ocean and land in Ruin. Nobody had ever tried that before.
– Move Forward

Melia's idea of 'Do what you like; Gender and age will never be a problem' influenced countless people.
– Idol of the Age

But she didn't stop and proceed to create more records.
– Pilot Cap

Melia became the first female, and also the youngest, to fly across Miraland to Wasteland.
– Start of Legend

After a century, Pigeon Aviation Museum held a ceremony to honor Melia. Her spirit still stays.
– Route to Dream

When a young girl, at the age of 15, went onto a plane for the first time, she knew her life's purpose was to fly. Melia and her father was passionate—they even owned a red plane—but her father was too old and spent most of his time at the airport, looking for it. She accomplished incredible feats, such as being the first female, as well as youngest, to fly across Miraland, including Ruin and Wasteland. Her thoughts influenced many. A century later, Pigeon Aviation Museum held a ceremony to honor Melia. It is mentioned that she graduated from a flight college at 18 and five years later owned her own plane named 'Little Red Bus'.

*Melia is likely based on Amelia Earhart, the first woman to fly across the Atlantic Ocean solo.

Retrieved from "https://lovenikki.fandom.com/wiki/Dream_Sky?oldid=145706"
Community content is available under CC-BY-SA unless otherwise noted.