As the black vortex swept across the land, from the rift, otherworldly beasts came. They slaughtered and ravaged.
– Forsaken in Abyss

At the critical moment, a female human knight stood out and led the soldiers of human and other races in the battle.
– Rose Stardust

In a fierce campaign, the allies undertook great loss and their leader was nowhere to be found afterward.
– Star Maze

Rumors rose. Some said she was scared and fled before the battle and some said she had betrayed humans.
– The Brave's Vow

She ended up as a shame of the family, but the youngest girl of the family always believed she would come back.
– Dim Fire

Sally put on armor and started learning swordsmanship. People saw the heroine's spirit in her.
– Light of Fortitude

Sally grows into a soldier. Her trace covers the whole land and her sword has slain countless monsters.
– Heritage of Hope

Sally has become an excellent commander and takes the task to end all these. She clenches her fist.
– Dome Shooting Star

In later years, the number of beasts gradually decreases and the allies can finally confront the black vortex.
– Heir to Hero

In the core of the vortex, Sally saw a giant dragon fighting the beasts with its claws and flame
– Blue Dragon's Lament

The dragon fights with Sally's legion. At a critical moment, it even takes a strike that would have killed Sally.
– Infinite Echo

In the end, the dragon fell. As the great wind takes away its carcass, only a long sword of the heroine was left.
– Green Dawn

Among all the legends Ace has read, she admires this dragon knight most as she's the symbol of forever loyalty.
– Legend of Blue Dragon 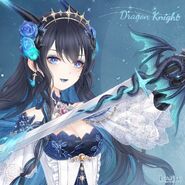 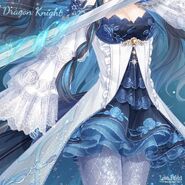 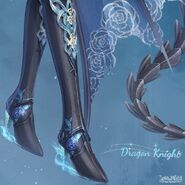 Retrieved from "https://lovenikki.fandom.com/wiki/Dragon_Knight?oldid=124841"
Community content is available under CC-BY-SA unless otherwise noted.