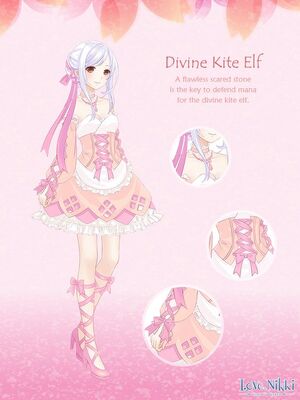 A flawless sacred stone is the key to defend mana for the divine kite elf.

Divine Kite Elf is a Lilith suit that can be obtained through customization of its parts, which can be crafted. The series that can be crafted is the black and blue recolor, while the original series is white and blue.

A kite elf from the Divine Realm. Its white ribbons and gold hair bring out the best of each other.
– Floating Kite-Gold

The flawless sacred stone is the key to defend mana for the divine kite elf. This is her variant suit.
– Divine Kite Elf


The white lace and the high heels bring out the best of each other -- it is the best scene of the divine realm.
– Kite Trail-White

A kite elf from the Magical Realm. Its flowing black ribbons have a touch of mystery
– Floating Kite-Blue


She is an untraceable kite. No strings can pull her pretty figure...
– Kite Trail-Black

A kite elf from the Iceworld. Its pink ribbons are dreamy and sweet.
– Floating Kite-White


The sweet snow kite elf is pure and lively. Her talisman is the pink fluorite in front of her neck.
– Snow Kite Elf

A kite elf from the ocean. Its flowing blue ribbons are like shifting waves.
– Floating Kite-Gray


Tread on the ocean waves and head into the distance with the see breeze...
– Kite Trail-Blue

Divine Kite Elf describes 3 different (4 including the 2/3 recolor) "kite elves", each coming from different realms and having different appearances and personalities.

The original descriptions describe a kite elf from the Divine Realm, which explains the suit's title. Her sacred stone defends her mana - her "variant suit" - and the rest of her outfit brings out the best of each other.

The blue-and-black version describe a kite elf from the Magical Realm. She has a pretty figure, yet her dress gives off an arcane and vintage feeling, and she is completely untraceable.

The pink-and-white version describes a kite elf from the Iceworld. She is lively and pure, and her outfit is dreamy and cute. Her talisman is the pink fluorite around her neck.

The 2/3 gray-and-blue recolor describes a kite elf from the ocean. Her hair ribbons are like shifting waves, and there's not much actually about her.

The suit and its customizations
Add a photo to this gallery

Retrieved from "https://lovenikki.fandom.com/wiki/Divine_Kite_Elf?oldid=160940"
Community content is available under CC-BY-SA unless otherwise noted.