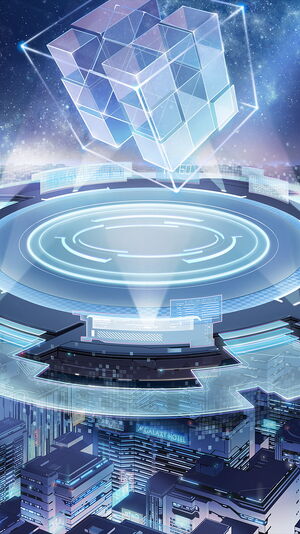 Dimension Square is a city in Ruin Island.

Dimension Square is a city with lots of robots, so they keep the temperature low to prevent overheating. There is also a huge floating arena called the Music Cube, where the music contest between Hemis and Kaiser was held. It has lots of floating graphics and bright lights that display colorful magic squares as well as portray the universe using lights that depict the stars and oceans.[1]

Nikki and Momo visited Dimension Square when Nikki was invited to a virtual concert. They were transported there by a beam of light and a girl that came out of Nikki's computer screen. Upon arriving, they were sent to a virtual auditorium and discovered that they could see the city even though only their minds were there.[1]

Cali also attended the event, representing Amphithea News. During the event, Hemis and Kaiser competed in a music battle, with the audience voting which they prefer between the two.[1]

Retrieved from "https://lovenikki.fandom.com/wiki/Dimension_Square?oldid=124076"
Community content is available under CC-BY-SA unless otherwise noted.