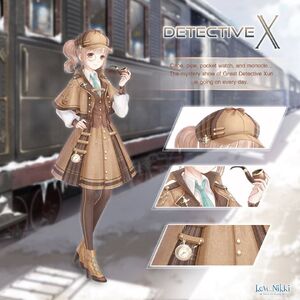 In the morning, Xun made herself a cup of mocha when a scream broke the silence in the early morning.
– Velvet Mocha

Time to show up! Great Detective Xun will help the neighbor grandma to find its lost orange cat.
– Detective Incident

Xun sees neighbor grandma hurriedly passing by under the window. From her cries, Xun concludes her pet is gone!
– Puzzle Solver

Xun first comes to the garden. It's the gathering place for all the cats around, but Miss Cookie is not there.
– Piece by Piece

Xun squats down to try to communicate with the kittens. Maybe they have some clues.
– Secret Chase

But, alas, the cats don't seem to understand Xun. One of them only stamped a paw print on her forehead.
– Great Detective Seal

However, the setback is nothing to Xun. She moves on and believes the truth lies in the very small details.
– Sharp Instinct

A very strange instinct comes up to her mind. Xun returns to grandma's home and checks every corner.
– Wonderful Idea

Suddenly, a biscuit box upside down on the top of the cabinet attracts her attention. Xun climbs on the table.
– Fruitwood Pipe

Under the box is Miss Biscuit who is sleeping like a log. Its tails waves, seemingly protesting this disturbance.
– Vintage Monocle

Cape, pipe, pocket watch, and monocle... The mystery show of Great Detective Xun is going on every day.
– Inference Moment

Detective X is about a detective named Xun from a daily mystery show. She wears a cape, has a pipe, a pocket watch and a monocle, and she believes that the truth was in the very small details.

In the early morning, Xun made herself a cup of mocha when a scream broke the silence. She saw the neighbor grandma hurriedly passing by the window and from her cries, Xun concluded that her pet was gone. Thus it was time for her to show up and help the grandma find her lost orange cat, Miss Cookie/Miss Biscuit. Xun went to the garden first, as it was the gathering place for all the cats around, but the cat was not there. She squatted down to try to communicate with the kittens; maybe they had some clues, but alas, the cats didn't seem to understand her. One of them only even stamped a paw print on her forehead. But to Xun, the setback was nothing and she moved on. It was then a very strange instinct came up to her mind. She returned to the grandma's home and checked every corner. Suddenly, an upside-down biscuit box on the top of the cabinet attracted her attention. Xun climbed up on the table and found the cat sleeping like a log under the box, its tail waving as if protesting the disturbance. 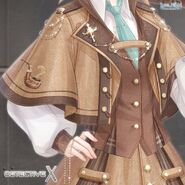 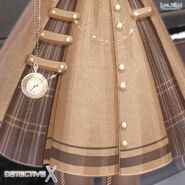 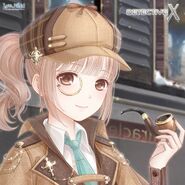 Retrieved from "https://lovenikki.fandom.com/wiki/Detective_X?oldid=133953"
Community content is available under CC-BY-SA unless otherwise noted.