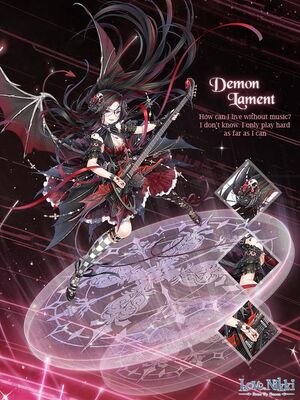 How can I live without music? I don't know, I only play as hard as far as I can.

Demon Lament is an Apple suit that can be obtained from the Miracle Concert Event.

She's a genius musician born in romantic Pigeon Empire. There is a touch of sadness in the craziness
– Only Leader

Since she was born, Maria was surrounded by Classics, but what she loves are rock and electronics.
– Exotic Manjusaka

She knew many people who love rock just like her online. She knew she's not alone.
– Magic Beyond

It's Rino who made her love electronics. Her music has a magic that appeals you before you even know.
– Dream Illation

After she finished several songs with Rino, to build a band, she started to recruit as Rino was virtual
– Roadmap to Top

Maria is not a social person, but her love for music was recognized by others in the band.
– Inconceivable Riddle

There is a blood-think sorrow in the extreme sorrow and madness. That's the style of Maria.
– Frantic March

She's like the opposite image of Rino. Rino is sane and optimistic, while Maria is chaos and depressed.
– Double Magic

Rino, an AI who was designed to compose. She could have been a human, but she doesn't want to talk about that.
– Bat Groan

Only Maria knows the secret of Rino, but she always treats her just like she's real mankind.
– Secret Wings

Encouraged by Rino, Maria tried to write lyrics for her tunes. This Love Arrow is her first cute style work.
– Arrow of Cupid

She worried about Sani when she first came, but she started to play, she made the decision instantly.
– Demon Blood Mittens

She said to Karin, 'defeat me if you want to join.' But they couldn't find a winner after an hour's contest
– Demon Blood Gauntlets

Play! Scream! To merge yourself into music alone. Nothing is better than releasing your soul!
– Soul Scream

When music rises, Maria's hair moves at the same time. She cannot control it. It's the power of music.
– Demonic Wind

The desire for music erupted. The subtle pain in the blood stimulates Maria to let out the bloody lament
– Demon Lament

The World's Best Band? Maria smiled, it's fun. And she has to try as it's Rino's wish.
– All the Best

Serious Sani, firm Karin, focused Rino, to kindle the fire of music with them is the best!
– Super Stage

She never imagined she would play her guitar on such a big stage with so many audiences.
– Heart of Rock

The story of Demon Lament shows Maria growing up and how her love of music developed. She met Rino, who was secretly an AI. Rino spurred her love of electronics, and Maria kept her secret for her.

Maria was never a happy or social person, but she started a band with Rino, Sani, and Karin and was recognized as a musician by the others. Music gave her life meaning, and she loved to play with them and for audiences.

Retrieved from "https://lovenikki.fandom.com/wiki/Demon_Lament?oldid=133827"
Community content is available under CC-BY-SA unless otherwise noted.