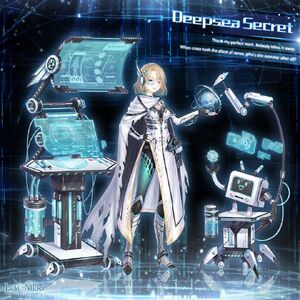 This is my perfect work. Nobody takes it away. When craze took the place of sense, who's the monster after all?

What makes scientist Sophie live for so long? Newton was so curious that she wants to find it out at any cost.
– Deepsea Secret

She never thought of the danger of the therapy applied. It's not what she concerns.
– Edge of Danger


For Newton, machines are more familiar than humans. They are obedient and docile. How cute.
– Machine Conception


She knew that Sophie would agree because they are so similar. The chance of disaster is negligent.
– Origin of Evil


The distorted thought entered her brain like sharp pinpoint piercing the skin. It destroyed the consciousness.
– Sharp Outline


The data that scope conveyed clearly says the consciousness of Sophie has entered the void. She's a monster now.
– Sophisticated Rig


The resonating alarm reminds her of a disaster. The scarlet is devouring everything alive like a black hole.
– Final Signal


Newton's research center is filled with various new machines, but the old 010 remains as a reliable assistant.
– Code 010


She strayed too far away from the original trail and stepped into the bottomless abyss without hesitation.
– Void Ambition


This is my perfect work. Nobody takes it away. When craze took the place of sense, who's the monster after all?
– Science Criminal

Deepsea Secret describes Newton's point of view when she experiments on Sophie, a fellow scientist. The reason why Newton wanted to experiment was to find out why Sophie lived so long. She was so curious that she wanted to find out at any cost, and she knew that Sophie would agree because how similar they are, disregarding ethics and risks in pursuit of knowledge.

The therapy was extremely dangerous. Planting a distorted thought into Sophie's head, it destroyed her consciousness and made it enter the void, reducing her into a monster. The alarms rang and she devoured everything alive like a black hole. Newton had strayed too far from her original trail but accepted it nevertheless, stepping into the abyss without hesitation. Despite all this, Newton considered the experiment her magnum opus which nobody could take away from her. Even so, in the end she did question who the true monster was, letting insanity take control over sanity.

Newton used machines as her assistants, finding them cute for how docile and obedient they are. Her research center was filled with various new machines, but her old 010 remained just as reliable. She also used Code 997 as an assistant, and Code 997 referred her akin to how a servant would to its master.

The event text of the Deepsea Secret Event indicates that Newton's experiment was fictional, being the theme of an immersive Game Center event.

Retrieved from "https://lovenikki.fandom.com/wiki/Deepsea_Secret?oldid=160976"
Community content is available under CC-BY-SA unless otherwise noted.