Love Nikki-Dress UP Queen! Wiki
Register
Don't have an account?
Sign In
Advertisement
in: Characters, Supporting Characters, Females,
and 7 more

デーヴィー（キャラクター）
Debbie is a character in Love Nikki. She is a member of the Iron Rose Stylist Legion, a group of powerful stylists from the Pigeon Kingdom.

Debbie is a short girl with a small round face. Her blonde hair is slightly wavy and falls to her shoulders, framing her face, and she wears small round glasses. She also has a scholar's hat and long red robes with gold trim. She stands on a stack of books in order to increase her height. It's said that she likes burgundy and deep blue colors.[8]

Debbie is quite different from the other, more mature and confident members of the Iron Rose. She is a bookworm and once she gets started on a book, it's hard to get her attention again.[1]

Debbie is ranked tenth in the Iron Rose, and her styling is unreliable due to the fact that she uses books for her designs rather than coming up with them herself. In order to improve her styling, Debbie once read 'The Continental Fashion History' to address her weaknesses.[8]

When she was little, Debbie had a very big dream: becoming the most knowledgeable stylist in Miraland. She hoped that one day her name could be recorded in the book 'The Continental Fashion History'.[9]

Growing up, Debbie attended school with a girl named Ling, who was motivated to do as well as Debbie did. Debbie regarded her as a friend, and they spent a lot of time inventing together and helping each other on projects.[10]

Debbie ended up quitting school. However, she reunited with Ling at a later date, and Ling finally got to give her a handbag she had made for Debbie as a gift.[10]

Sometime later, Debbie applied to the Iron Rose Stylist Legion to get access to the Pigeon Kingdom's Library and its materials.[9]

The Iron Rose set up camp in Lor River City before going to Cloud City to save Nikki. Ransa, Mela and Sherry attempted to get Debbie's attention so that she could come with them. However, Debbie was reading a book and didn't notice, so they left without her.[1]

When they returned with Nikki and her friends, Debbie appeared in front of the airship angrily. She accused the other members of Iron Rose for leaving her behind on purpose, but they said it was like she was in her own world. Meanwhile, Bobo was enraptured by Debbie, saying that she was so different from the other members of the Iron Rose and marveling at her appearance.[1]

Ransa told Debbie that she brought her Nikki as a gift, saying that Debbie could learn from Nikki. However, when they had a styling battle over Wasteland style, Debbie dressed in a cute girl's style, causing her to get only a thousand points.[1] When Momo questioned her skill, Debbie said she had her book opened to the wrong page, which was why she dressed in the wrong way.[11]

Debbie and Ace later traveled together on the airship, and Ace made a stop in North Kingdom to rescue Nikki, Kimi, and Momo. Debbie initially didn't want to pick them up, saying that they would just slow them down, but admitted she'd been wanting to compete against Nikki again.[12] Together they left the North Kingdom, Debbie piloting the airship.[13]

Following the disbandment of the Iron Rose, Debbie, Ransa, and Nikki continued to work together. When Nikki was locked up in Elle's castle, Debbie disguised herself as a guard to help her escape.[3] When it seemed they would be captured, Debbie led Nikki into a magic mirror on the wall, where they met a mirror fairy named Eli.[4]

Eli had a message to send from Chloris, which Debbie volunteered to deliver for him as a member of the Iron Rose. Momo questioned her, asking how she could still stay loyal to a group that had disbanded, but Debbie insisted that in her heart, the Iron Rose would always be there.[14] Unfortunately, from outside the mirror, Sherry heard every word she said, and she had Debbie thrown out of the city for still daring to be loyal to the disbanded group.[15]

Mela takes every opportunity to poke fun at and bully Debbie.[8] However, Debbie clearly still has regard for her, as she appears when Debbie is in the mirror world that shows who she wants to see. Mirror-Mela is drinking, and Debbie urges her to ease back, but Mela just takes the opportunity to make fun of her again as she does in the real world.[16]

Debbie cares a lot for Sherry, and is clearly worried about her after the Iron Rose's disbandment. She knew her enough to recognize that the disbandment would hurt Sherry the most.[17] However, Sherry didn't display the same concern for Debbie's feelings, not hesitating to throw her out of the castle once she heard Debbie was still loyal to Iron Rose.[15]

Ling is Debbie's close friend and rival from school. She is a famous inventor from Cloud Empire who went to Pigeon in order to expand her knowledge. The two of them competed together and helped each other learn.[10] 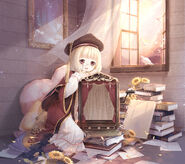 Debbie in the Sea of Trees event 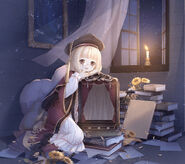 Debbie in the Sea of Trees event

From the Wonder Museum event map