This page details information on each season of Dawn Front. 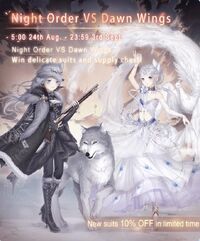 The dungeon of snowfield has been woken up. The darkness and the dawn have collided for the first time.

Kimi and Orlando assist Nameless Chivalric Order in destroying Nidhogg's plan, which requires a battle against Reid and Flynn in Losol City. To reinforce, please put on The customized clothes of the Apple Federation.

In a snowy canyon in the north, Louie is going to stop Nidhogg from making the Heart of Snow. Please put on Clothes of North Kingdom to help them.

Kloris accepted the Queen's commission to support Nameless Chivalric Order, but Gray Raven stopped him in the 7th base of Apple Federation. Put on the gorgeous and elegant clothes of Pigeon Kingdom to assist them! 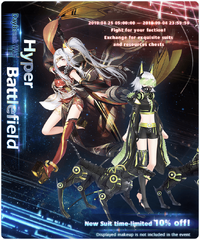 The lighthouse of the island shines a dazzling light, and the dawn and the darkness shall clash again.

To have the cutting-edge technology of the ruins, Kimi, as the diplomat of Apple Federation, is going to sail to Ruin Island with Bai Yongxi. However, Zhu Yuxian is about to be disguised and smuggled by his supporter, Reid, to steal a share. Please put on Cloud Warrior Outfit to help them.

Having known the news about leaking information of Ruin Island, Orlando leads elite agents to conduct a covert investigation to the light of science in the virtual world. At the same time, Shade also runs a mission to get the Omniray first and destroy Orlando's plans. Please put on Futuristic Outfit to help them.

When Louie was trying to get the lost property for the elves, he heard the news about leaking information of Ruin Island, and he decided to investigate and promote cooperation in person. Nidhogg sent troops to stop him to prevent uncertaintly. Please put on Inconspicuous Outfit to help them. 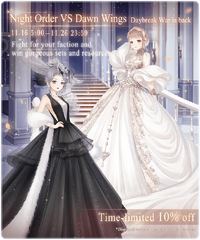 The border city is shrouded in the cloud of danger as the dark force draws near.

Reid heads to Rosset City to trade some potions. Shade is tasked to get rid of Orlando's tracking. Kimi seems to have found something about Lady Crescent and the real trade position. Please put on Apple Federation Haute Couture to assist them.

Nidhogg uses a batch of Potion No.7 as the bait to lure the main force of Nameless Chivalric Order into an encirclement. Please wear warm North army suit to assist them.

Gray Raven heard some secrets about elves in the short fight. He broke into the taboo area in Pigeon Forest to collect more samples for the new potion. Dress up like Pigeon Forest elves to assist them.

Retrieved from "https://lovenikki.fandom.com/wiki/Dawn_Front/Seasons?oldid=91219"
Community content is available under CC-BY-SA unless otherwise noted.