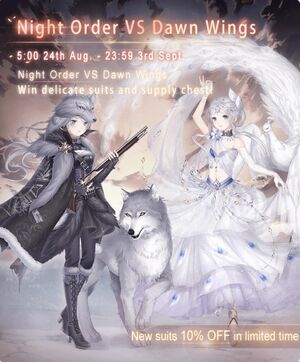 The Dawn Front event is a reoccurring event involving stages of gameplay and a unique plot, allowing each user to choose a faction.

How to Play[edit | edit source]

The first day of the Dawn Front event does not contain any gameplay. It is suggested to spend this day familiarizing the rules, the outfits, and the overall story surrounding the event.

The second and third days of the event are when the player should choose the faction they want to ally themselves with, as well as set their style. They must set three different outfits, which are used in the next stage of the event.

On the fourth day of the event, starting from 9:00 server time, the game will match the player with other players once per hour. Winning an event will allow the player to gain Feat

, which can then be exchanged for Peak Tokens

in the Feat Exchange. A player can also choose to reinforce another commander on their side for two hours one time during the battles.

The final days of the event are used to exchange

for pieces of the suits and materials. New suits will have reduced prices. 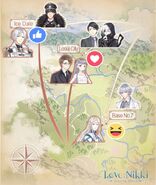 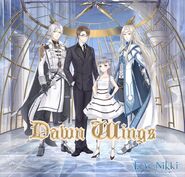 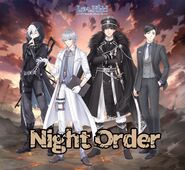 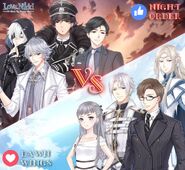 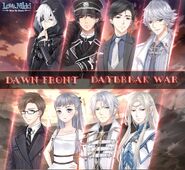 Retrieved from "https://lovenikki.fandom.com/wiki/Dawn_Front?oldid=185426"
Community content is available under CC-BY-SA unless otherwise noted.