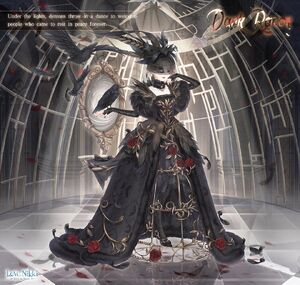 Under the lights, demons throw in a dance to welcome people who came to rest in peace forever.

Dark Raven is an Pigeon suit which first appeared as a Cumulative Recharge suit from January 4th to 10th, 2019 for 520 worth of

Shrouded by the heavy fog, ravens are the only thing you can hear in this forgotten mansion. Then someone broke in.
– Mansion in Mist

The bustle keeps the dress from dragging but looks more like a delicate cage. Imprisoned souls can never escape.
– Scarlet Cage


The mirror of prediction is her chip to mediate in the elites. Those in higher position worry more about their end.
– Dark Corridor


People covet the mirror of prediction and snuck into the mansion, though none noticed the laughter in raven chirp.
– Fallen Feather


Unfinished black tea fell onto the withered earth and in the aroma of blood, scarlet flowers sprouted.
– Bloody Dreamland


All the images are the lies she coined for the visitors. The illusions appeared in the mirror made her laugh.
– Fake Truth


Through the broken mirror, she saw a figure smiling under the cold veil. Raven screamed in the night.
– Swing of Soul


As the pointer brings time to midnight, they became puppets with no feel of pain, kneeling before her.
– Midnight Demon


In a trance, the broken mirror restored. Ravens attack the offenders, while the scarlet eyes watched in the mirror.
– Mirror and Raven


Under the lights, demons throw in a dance to welcome people who came to rest in peace forever.
– Dark Raven 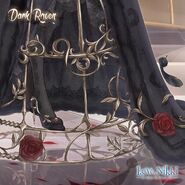 Retrieved from "https://lovenikki.fandom.com/wiki/Dark_Raven?oldid=161456"
Community content is available under CC-BY-SA unless otherwise noted.