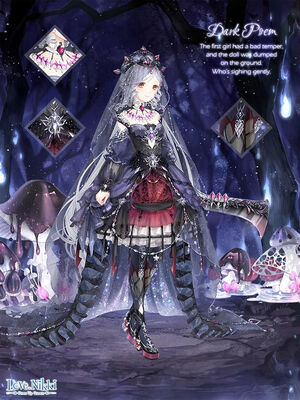 Dark Poem is a Pigeon suit that appeared in the Night Castle Event. It can now be obtained through Recipe Crafting.

A doll sits on the windowsill. Wearing a delicate suit, it has an innocent look but a sly heart.
– Doomed Doll

The first girl had a bad temper, and the doll was dumped on the ground. Who's sighing gently.
– Dark Ballad

A doll looks at the street on the windowsill. Some children stop by to ask their mothers to buy it home.
– Ghost Fire in Woods

The second girl had a sweet smile. After a long journey, it was placed in the attic covered with dust.
– Red Maze

A doll was left on the shelf, with dirty hair and worn dress. Only the music box kept singing.
– Veil of Fear

Collector carefully picked up the doll and dusted it. It said thank you in heart and he heard it.
– Crystal Coronet

A doll sits on the windowsill. The birds chirp outside, the breeze gently strokes her hair.
– Spell Window

Those experiences now became an armor and the blade in her hand to protect herself from harm.
– Crystal Chopper

Mushrooms that only appear in the night. They can turn animals into dolls and has the power of mind reading.
– Luminous Mushroom

Dark Poem depicts a doll that is passed along to various girls. It sits in the windowsill of a shop, wearing a delicate suit and watching the street outside. However, the doll isn't all it seems – it has thoughts and feelings of its own.

The first girl had a bad temper, and she was mean to the doll, dropping it on the ground. The second girl was sweet, but the doll eventually ended up in the attic. Finally, a collector picked up the doll and dusted her off. Though the doll didn't say it aloud, she thought thank you and the collector heard it.

Though the doll went through a lot, she became stronger because of her experiences. Because of that, she began to wield a blade in her hand in order to protect herself.

The item description for Luminous Mushroom implies that the doll was originally an animal, which was turned into a doll by magical mushrooms that only appear during the night.

It is likely that the collector is the same as the one mentioned in Eternal Instant, the other suit from the event.

Retrieved from "https://lovenikki.fandom.com/wiki/Dark_Poem?oldid=142921"
Community content is available under CC-BY-SA unless otherwise noted.