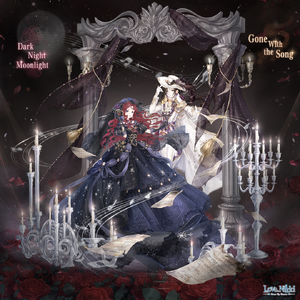 Dark Night Moonlight is a Festivals suit that could be obtained during the Lie of Moonlight event.

From a small skylight, silver moonlight cast down on the lonely girl who looked out at this starry night.
– Red Curse

The earl's castle is luxurious, but in the cellar, the bastard Luya was grounded like a prisoner.
– Endless Darkness

Luya spent her days in the little room. The moonlight from the skylight is the only comfort for years.
– Only Light

The wedding turned into big news that the bride fled with a prisoner in the castle.
– Daybreak Light

In desperation, Luya opened her mind to Cecil. Cecil promises to take her away and they will see the bigger world.
– Eternal Light

The person gone with the bride is a renowned wandering singer. His song is said to have magic power.
– Silent Moonlight

She has one more expectation. The song drifting from the distance by the night breeze feels dreamy and alluring.
– Silent Whisper

The man in the white mask came as promised. Cecil opened the skylight and cast down a bouquet of butterfly orchid.
– Twilight Star

Luya looked up into his brown eyes. She said to herself, what a pair of touching eyes, so deep and free.
– Gem Requiem

Cecil, bathed under the moonlight, stood outside the skylight, just like the first time she saw him.
– Dark Red Light

However, the countess announced her engagement with a senile lord, claiming that it's her only worth as a bastard.
– Locked Heart

After years of imprisonment, Luya's heart was kindled by Cecil's stories again. How she wants to be freed.
– Undying Radiance

However, a song passed from the castle when she was on the carriage, the song that lit up countless nights for her.
– Song under Moon

However, Cecil didn't come to Luya. Several days later, she was on the carriage to the lord.
– Brilliant Night Star

It's said that the singer was seen again in another corner of the world, though he was no longer who he had been.
– Dark's End

While the Earl's castle was luxurious, Luya was grounded like a prisoner in the cellar, because she was a bastard's child. There, she spent her days stuck in the little room, the moonlight from the skylight being her only comfort for years.

After meeting Cecil, the two continued seeing each other in secret. She had opened her mind to him in desperation, and he promised to take her away; together, they would see the bigger world. Holding one more expectation from him, the song drifting from the distance by the night breeze felt dreamy and alluring. During one of their meetings, the man wearing a white mask came as promised, opening the skylight and throwing down a bouquet of butterfly orchid to her. He was bathed under the moonlight and looked just like the first time she saw him. As Luya looked up into his brown eyes, she said to herself: "What a pair of touching eyes, so deep and free." After years of imprisonment, her heart was kindled by Cecil's stories; how she longed to be free! Unfortunately for her, however, the countess had announced her engagement with a senile lord, claiming that it was her only worth as a bastard. Cecil didn't come back, and several days later, she was on the carriage to the lord. However, while she was sitting on the carriage, a song passed from the castle—a song that had lit up countless nights for her. The prisoner from the castle who fled with the bride is highly likely Cecil, as indicated by the description of him being "a renowned wandering singer" and his song said to have "magic power." Because of this incident, the wedding turned into big news.

While the item name Dark's End suggests a tragic twist to its description, this might not necessarily be the case. It could merely just state that Cecil has changed as a person in another place, whether positively or negatively.

A post from the 浮光镜界 (Realm of Reflections) event (unreleased on the International server) revealed that the story of Luya and Cecil was a play by the December Troupe.

See also: Gone With the Song. 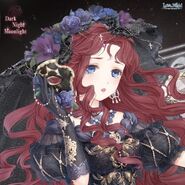 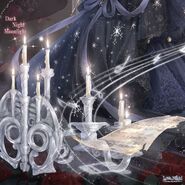 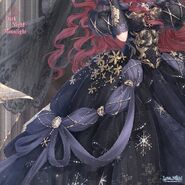 Retrieved from "https://lovenikki.fandom.com/wiki/Dark_Night_Moonlight?oldid=146204"
Community content is available under CC-BY-SA unless otherwise noted.