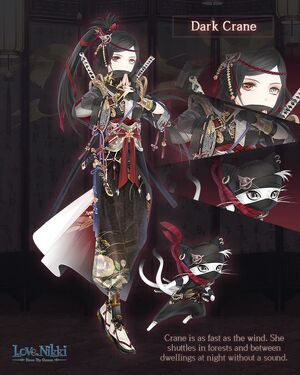 Crane is as fast as the wind. She shuttles in forests and between dwellings at night without a sound.

Dark Crane is a Cloud suit that can be obtained through crafting. The hair, dress, and shoes are also required to pass stage V1: 19-4 Losol Shadow.

Taking people's life, the ninja hides in the shadow. The underground forces of Losol City call this ninja from cloud 'Crane'.
– Shadow of the Crane

No one knows the true name of 'Crane' or where she came from. People only know she has peculiar eyes, and deft hands.
– Blood Moon Exit the Clouds

Crane is as fast as wind. She shuttles in forests and between dwellings at night without a sound.
– Disappearing Moon

Rivers flow into the sea and all birds fly to the moon. Crane traveled in the mountains and buried her past.
– Birds Return on a Full Moon

A ninja should be traceless, but the beautiful feather will not affect Crane's action.
– Wind, Forest, Fire, Mountain

In Losol City, chaos gives birth to darkness. Injured badly, Crane passed out in front of the church. She joined the blood blade
– Ninja Gloves

Someone fell on the ground in the darkness of Losol City. Crane moved stealthily at night, and her feather was blood-stained.
– Ghost Month Quicksand

The powder made by varieties of ingredients tastes very subtle. Why a cat has a name like this? I'd rather not know.
– Military Diet Pill

Use your own hands ... to end the hatred. 'Crane can not remember who said this to her, but she is loyal to him.
– Six Principle Yin and Yang

The suit is about a ninja called Crane from Cloud that operates in Losol, the dark and crime-filled city in Apple Federal. Crane was told once by somebody that she should use her own hands to end the hatred, and since then she has lived by that statement, though she doesn't remember who said it. She buried her past, and nobody knew her real name or where she came from. She sneaks into houses and around the city at night without a sound.

Retrieved from "https://lovenikki.fandom.com/wiki/Dark_Crane?oldid=131737"
Community content is available under CC-BY-SA unless otherwise noted.