The famous dessert contest in Lilith is around the corner. She decides to sign up for this contest.

Crown of Love is a Pigeon suit that can be obtained through evolution of clothes bought in the Association Store.

Lina has a gift in making desserts. Her dream is to own a dessert hut herself.
– Cocoa Mousses

The famous dessert contest in Lilith is around the corner. Lina decides to sign up for this contest.
– Sweetheart


Lina has her own way. In the preliminary contest, she is widely acclaimed for foil rum chocolate.
– Gold Foil Rum


To make strawberry yogurt in the contest, Lina ran around the whole city for the ingredient.
– Strawberry Yogurt


Lina dreamed that she wore the Crown of Love for the champion. How much she hopes to win!
– Love Crown


With her exclusive dessert, Lina plans to take a surprise move.
– Sweet Icing


The dessert made by good and innocent Lina has a special mark of her own.
– Only You


She also wants to make a step further and become more confident through this contest.
– Sweetheart-Rare


Add rum into melted chocolate and cast the mixture into the diamond shape and wrap it in gold foil.
– Gold Foil Rum-Rare


It has attracted a lot of girls in the Lilith Kingdom. Lina's efforts finally get paid.
– Strawberry Yogurt-Rare


With the dream that she had at the night of the semi-final, Lina decides to go all out for victory.
– Love Crown-Rare


The secret recipe of Lina is honey and almond decorated with cherry candies with mint frosting.
– Sweet Icing-Rare


As the competition comes to an end, Lina won her champion in the Competition of Lilith Kingdom.
– Only You-Rare

The suit's descriptions tell the story of a Lilith girl named Lina. She loves making yogurt-based desserts and signs up for a dessert-making contest, which she wins.

Despite the suit's categorization under Pigeon Kingdom, the suit has nothing to do with Pigeon as it takes place only in Lilith. 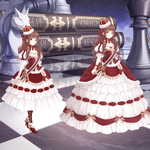