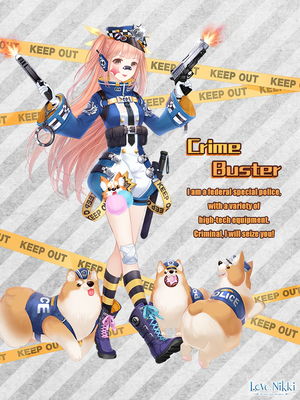 I am a federal special police, with a variety of high-tech equipment. Criminal, I will seize you!

Crime Buster is an Apple suit that appeared in the Midnight Escape Event. It can now be bought in the Clothes Store and be crafted.

You're Gray Raven's friend, you won't let me down. Haha, I haven't met any interesting prey for a long time.
– Sanction of Doris

He said he enjoyed the chase. So did I, because I never felt so happy before.
– Heartbeat Chase

Having the power to steal people's secret—Curt is interesting. However, there's no need to have any secrets.
– Exclusive Kneepad

My lovely criminal vanished into night air again. He said, if I can catch him next time, he will give me a gift.
– True Identity

The thief Curt was prisoned in the dark dungeon. The newly invented chain lock is unbreakable.
– Police Dog Assistant

Today, tomorrow, the day after tomorrow. Why there are so many criminals? My dog is yawning again.
– Absolute Authority

Coming out at night, Mr. Curt is really like a black cat. He is quiet and traceless. Wait, there's an alert.
– Message Receiver

So, let's use the special laser gun this time. Mr. Curt, I will not only capture you but also all your preys.
– Laser Pistol

Aha, Mr. Curt, how can you be so stupid to help me. For that, I will choose the handcuffs of lowest current.
– Electrical Handcuffs

Here comes the assistance request application from the Federal Police Department. And this time It's Gray Raven.
– Tracking Time

Unlock my handcuffs in 0.24 milliseconds?! Interesting… It's getting interesting.
– The Watching Star

But I fell again ... My nervous system adapter is always a problem. I was but a step away to catch Curt!
– The Incident

Sorry! It's my fault. I heard that because of my weapons, Welton is in outage. But it's no big deal, isn't it?
– City Under Curfew

I'm the special police Doris of Ruin Island. A small gift? Leave it for other innocent babies.
– Sky Pursuit

He woke up and showed me a small gift from his pocket. I impatiently opened the gift but was shocked still.
– Crime Buster

This suit represents Doris, a special police from Ruin Island. She is highly skilled in catching criminals to the point of remarking it being boring and repetitive. However, when she obtains an assistance request application from the Federal Police Department, her excitement lit up when she saw that her target was a friend of Gray Raven. Her target was Curt. Thus began their game of cat and mouse.

The two enjoyed the chase. Doris' methods were not half-baked with her shooting lasers, using electric handcuffs and throwing him in dark dungeons. She once accidentally caused a power outage in Welton when chasing him. The two had developed feelings for each other. The special pose of Midnight Prisoner and Crime Buster describes Curt giving Doris a small gift from his pocket. Opening it impatiently, Doris was shocked and responded with a heartfelt hug.

Some item descriptions hint that Doris is actually a robot. In The Incident, her "nervous system adapter" is mentioned and said to always be a problem for her. In Midnight Prisoner, a sound of metal collision is described when an iron chain hit her body.

Retrieved from "https://lovenikki.fandom.com/wiki/Crime_Buster?oldid=145674"
Community content is available under CC-BY-SA unless otherwise noted.