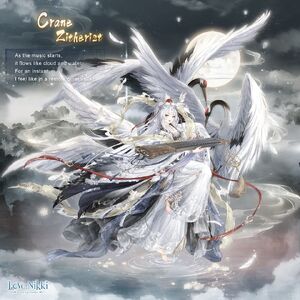 As the music starts, it flows like cloud and water. For an instant, I feel like in a remote quiet valley.

Crane Zitherist is a Cloud suit that can be obtained from Lucky Bags from March 25th to April 12th, 2019.

Every time I see a crane, I would think of a story and a friend that no one else can match.
– Crane Friend

On that snowy day, I was in the tavern when a zither player in crane feather cloak came in. People call her Rain.
– Rain and Frost

As the music starts, it flows like cloud and water. For an instant, I feel like in a remote quiet valley.
– Flowing Creek

When the tune comes to the end, the music suddenly grows powerful like a tsunami, slapping me like a giant wave.
– Force of String

The hat of white crane feathers and the white cloak with dim strips make her look noble and divine.
– Cinnabar Crane Coronet

Rain play another suite. The sound is so clear and penetrating that it feels like beyond this world.
– Clear Sound

I was half drunk and Rain seemed to stop playing. The zither is there, but not the white figure.
– Tender Cloud

I stood up to take a closer look at the zither. Suddenly, a golden smoke rose and a crane flew out from the smoke!
– Rippling Dream

As the tune ends, a celestial crane flies out. It circles around then disappeared. The golden smoke is gone too.
– Zither and Crane

Rain clearly knows that deeper music wins less appreciation, but she still wishes someone could understand her.
– High Crane Chirp

When you know a friend by music, words became colorless. As music starts, you know you are not alone.
– Frost-like Sound

Suddenly, I felt I'm in a valley in summer. It's so warm and comfortable that all the noises went out.
– Crane by Creek

This is a special crane with many gray feathers on the neck. It can hover the wings to play the zither.
– Red Crowned Bird

As the moon rises high, only Rain and I are in the tavern. I should be home, but I have to finish the last one.
– Moonlight on Fingers

Retrieved from "https://lovenikki.fandom.com/wiki/Crane_Zitherist?oldid=145785"
Community content is available under CC-BY-SA unless otherwise noted.