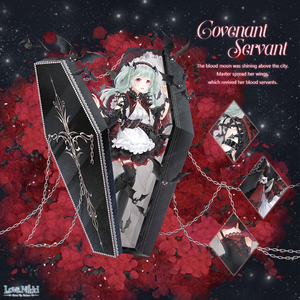 The blood moon was shining above the city. Master spread her wings, which revived her blood servants.

Covenant Servant is a Lilith suit that can be obtained from the Blood Moon Event.

One thief wanted fortune
She lost the tongue to lie
One thief wants power
Her body withered and decayed
The last thief covets the immortality of Queen
She drowned in her own blood
Why do I know all these?
Because I am the three thieves

Legend says when a blood moon rises from Lake Bovaly, the Shadow City and the Kindred will return to this world.
– Prophecy of Blood Moon

I sneaked into the center of the City, finding a gilded coffin planted into the earth upside down.
– Eternal Prisoner

I long for wealth, power and immortality and the Lord of Shadow City has them all.
– Original Sin: Greed

As fangs were buried in my throat, blood dyes the ground red. The pain, however, brings me unexpected happiness.
– A Midnight Lament

What is death? The division of flesh and soul. The thrill and pleasure of dying.
– Death Thrill

Put me to death, my master. I will always obey you, waiting for you to give me everything I want.
– Scarlet Cross

By the last moment of life, it occurs to me I am already dead. But the lust for the pain keeps me in the loop.
– Finale of Feast

The second time I die, I see my body decay. Creatures in the dark reveal their greedy eyes and fangs.
– Loop Chains

Tracing the Kindred, I finally found the portal to Shadow City but I did not expect death is approaching.
– Preface of Blood Moon

My eyes turned red, and fangs sprouted out. I reached out for master in pain—I'd be your most loyal servant.
– Silent Lamb

The blood moon was shining above the City. Under the Master's giant wings, her blood servant was just reborn.
– Covenant Servant

I'll forget everything and serve you with fear and joy. My master, you are the only God on the blood moon.
– Shadow of Bloody Bat

I beg her to grant me death again in blood pool. Wealth, immortality... nothing can match the pleasure of death.
– Kindred Coffin 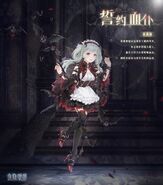 Retrieved from "https://lovenikki.fandom.com/wiki/Covenant_Servant?oldid=124671"
Community content is available under CC-BY-SA unless otherwise noted.