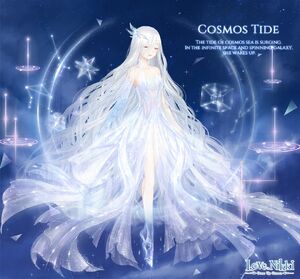 The tide of cosmos sea is surging. In the infinite space and spinning galaxy, she wakes up.

Cosmos Tide is a Ruin suit that can be obtained from a $15.99 USD Time-limited Pack along with the Flower Tale suit, 1,800

The tide of cosmos sea is surging. In the infinite space and spinning galaxies, Tidy will wake up.
– Sky Fall

When Tidy wakes up, deadly silence and endless void engulfed her.
– Cosmos Tide

The beat of life surges with minor noises into the infinite void, but Tidy cannot feel them.
– Endless Echo

It's a drift in the vast void. It's the invader of the sea of cosmos. Tidy had no clue about it.
– Time Pilot

Tidy touched the visitor. She saw the growing nebula, burning body, and the rebirth in ashes.
– Dawn of Dusk

It's a tiny noise bound by fate into the time. Tidy stares at the miraculous shimmer with tears.
– Void World

From that moment, time starts to flow. The drifting sparkle lighted the vast void.
– Shift Time

Filled with imagery of space and cosmos, the suit describes a being—Tidy—waking up. Around her was silence and endless void. She was unable to feel the beats of life surging into the infinite void. It came from a drift out of her world. She had no clue about it. When she touched it, she witnessed the life cycle of a star. She was so touched that she started crying. From that moment, time started to flow, and the light illuminated the void.

Source: https://www.papegames.cn/qjnn/id/
Add a photo to this gallery

Retrieved from "https://lovenikki.fandom.com/wiki/Cosmos_Tide?oldid=145600"
Community content is available under CC-BY-SA unless otherwise noted.