Love Nikki-Dress UP Queen! Wiki
Register
Don't have an account?
Sign In
Advertisement
in: Types of Suits, Collabs

This page displays suits that are collaborations, or "collabs", with other media outside of Love Nikki.

The event came to the English and Indonesian servers in October of 2020 with a modified background.

The Disney Princess collaboration was first available in the China, Hong Kong/Macau/Taiwan and Japan servers. It is based on iconic Disney princesses.

The pavilion event came with a unique currency mechanic; duplicates obtained turned into special currency that allowed players to exchange them for items such as gold, stamina, star coins and exclusive backgrounds.

It was brought to the International and Indonesian servers in June of 2020, and Ariel's top was modified at the request of Ariel's copyright owner in the United States.[1]

The Frozen collaboration consisted of a pavilion event and set of recharges based on the two iconic main characters, Anna and Elsa, of the Disney film, Frozen. It was available on the China, Hong Kong/Macau/Taiwan and Japan servers for Christmas 2019. It was brought to the International server in February 2020 and to the Indonesian server in March 2020.

The event comes in two parts: a hell event and a stamina event. The suits included in the hell event are Magical Mirai 2018, 2017, 2016, Kagamine Rin and Kagamine Len.

The event format was a pavilion that also allowed currency exchange.

The Barbie collaboration is only available in the international English server. The suits are based on fashion dolls manufactured by the American toy company Mattel, Inc. and were created to celebrate Barbie's 60th anniversary.

Space Fantasy and Romantic Moment came in a pavilion event. During this event, there was a web pavilion which included items that make up the Black & White Bathing Suit Barbie®[2]. It was confirmed that the suits will never return.

Several months later, another set of suits, Modern Queen and Unicorn Goddess, were created for the collaboration, obtainable through a pavilion event with a mechanism to exchange for the suit Idyllic Life. These suits were also confirmed to never return.

The suits are based on My Melody, My Sweet Piano, Pompompurin, Cinnamoroll and Gudetama respectively.

The Forbidden City collaboration is only available in the Chinese mainland server. It is based on the large, historical palace in Beijing, China. The Forbidden City events are unique and the suits are listed under an exclusive gallery.

The Guardian: The Lonely and Great God collaboration is only available on the Korean server.

Love in the Moonlight Collaboration[]

The Love in the Moonlight collaboration is only available on the Korean server. 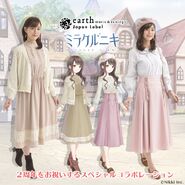