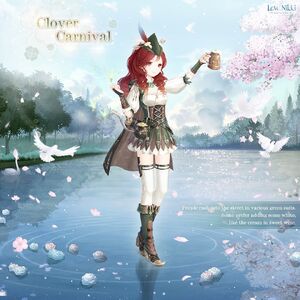 People rush into the street in various green suits. Some prefer adding some white like the cream in sweet wine.

Trace back to far past, the pioneers escaped the deserted wasteland, broke the chain, and reclaimed the new world.
– Genesis of World

Green structure, green clothes, green food. People use the color of peace To memorize the greatness of the creators
– Celebration of Peace


A white-beard old man leads the parade. Using the moments of high-five, he passes the clovers to kids.
– Emerald Cape


People rush into the street in various green suits. Some prefer adding some white, like the cream in sweet wine.
– Cream Decoration


The unanimous sound knocks the gate of the earth. People express their joy with dance and laughter.
– Copper Vintage Boots


In the lamplight, clover turns into fairies. They play the golden strings to spread the notes of happiness.
– Clover Fairy


A cap fixed by an arrow, hauling tons of second glances in the parade. 'It's a gift from fairies!'
– Emerald Feather Arrow


It's said at the end of the rainbow is the pot of fairies. The gold inside reflects the colorful lights.
– Pot of Gold


When night falls, people gather in the hall, finishing the carnival with the aroma of whiskey and beer.
– Temple Guard


A bow crafted with pure silver, the bane of demons. Draw the small string and fire the arrow of justice.
– Sacred Moon Bow


In the clear March, green dresses are everywhere. Play the bagpipe of joy and set off the firework of happiness!
– Clover Carnival 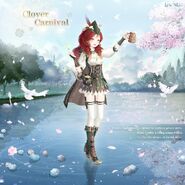 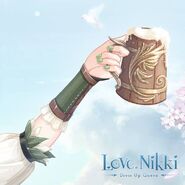 Retrieved from "https://lovenikki.fandom.com/wiki/Clover_Carnival?oldid=160003"
Community content is available under CC-BY-SA unless otherwise noted.