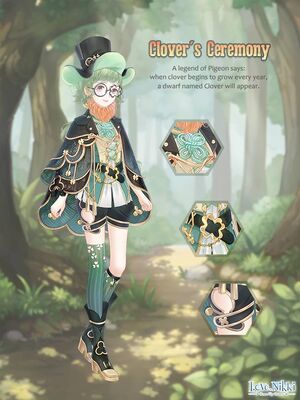 A legend of Pigeon says: when clover begins to grow every year, a dwarf named Clover will appear.

A legend of Pigeon says: when clover begins to grow every year, a dwarf named Clover will appear.
– Four-leaf Clover

In every March, Clover will grow all over Miraland. And a ceremony will be held in Pigeon
– Carnival Ceremony

Clover has a magic clover which can fulfill any wishes. Fortune, health, fame, love… everything.
– Magic Clover

However, it's not that easy to track Clover. The naughty dwarf would change into the form of a 4-leaf clover.
– The Figure in Field

Clover became the symbol of luck. People believe that the one find four leaf clover will be blessed
– Symbol of Luck

In the legend, Clover lives on an island called Emerald which only dwarves can find
– Emerald Island

The participants will dress up like Clover. They wear cute green hat and clothes with clover pattern
– Green Blessing

Some fairies will disguise as Clover to trick others. They threw away gold coin changed from stone
– Prank Fairy

The suit describes a dwarf named Clover from a hidden island called Emerald.[1] He appears when clovers begin to grow in Miraland every March. He has a magic clover which can grant wishes, and he can turn into a 4-leaf clover, which is said to grant luck.

Every year, a ceremony is held in Pigeon about the clover, and the participants will wear green hats and clothing with clover patterns. It's possible that Clover himself even joined the festivities.

Retrieved from "https://lovenikki.fandom.com/wiki/Clover%27s_Ceremony?oldid=145632"
Community content is available under CC-BY-SA unless otherwise noted.