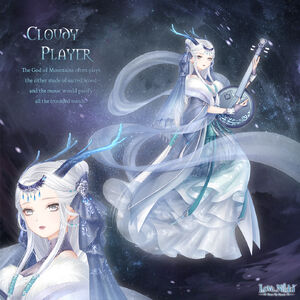 The God of Mountains often plays the zither made of sacred wood and the music would pacify all the troubled minds.

Cloudy Player is a Cloud suit that could be obtained during the Deluge Dragon event.

Mountain is the origin and root of every life. It stands high and extends wide to house everything.
– Upholder of World

Deer lives in the mountains and is given the force of the wilds, so it's divine.
– Divine Deer

The God of Mountains dwells in the peaks. She connects the cloud and sea with horns and dominates everything here.
– Horn of Cloud

Her thoughts spread into wilds, plains, and everything inside them.
– Misty Mountains

Bathed in the light of moon and stars, mountains share eternity with heaven.
– Bathed in Moonlight

Everything, just or evil, wise or fool, comes from the mountains. It produces everything and guards everything.
– Sign of Peace

The God of Mountains often plays the zither made of sacred wood and the music would pacify all the troubled minds.
– Zither of Purity

Though her human appearance, the God of Mountains has mist in her eyes that rises and ebbs.
– Tide of Fog

The severe drought goes rampant on this previously lush and fertile place.
– Cloudless

Fu Su intends to find the water based on fengshui traces. God of Mountains waves her sleeve and gives him support.
– Dispersing Cloud Sky 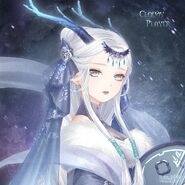 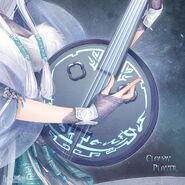 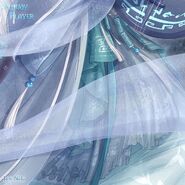 Retrieved from "https://lovenikki.fandom.com/wiki/Cloudy_Player?oldid=134184"
Community content is available under CC-BY-SA unless otherwise noted.