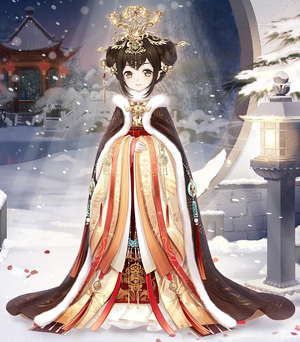 Your Majesty[1]
Your Highness[2]

The Cloud Empress is the alleged empress of Cloud Empire.

The empress is just a child, but shows remarkable maturity for her age. She is put under a lot of stress, and she is worried about the state of the war and what will happen in Cloud.[4]

Growing up, the empress did not see her dad often, and when she did, she had to call him "your majesty". Her mother also passed away when she was young, leaving her with only a nanny. Though the empress was upset about this at first, the pain eased away as she grew up. She was only allowed to interact with nannies and maids and stay inside the palace.[3]

One day, Bai Yongxi came into the palace and talked with one of her nannies, which sparked her curiosity. Eventually, he took her away and told her she was going to be the empress. He taught her how to manage Cloud and she worked hard to try and understand.[3]

She also met Fu Su, who she refers to as Brother Immortal. She felt he was more patient and kind than Bai Yongxi.[3]

In Jinlin Palace, Fu Su visited the Cloud Empress while she was locked in a dark room. Fu Su was covered in blood, and the Empress was worried about their position in the war. Fu Su told her not to worry about him, saying that she must stand on the round platform and recite the words Bai Yongxi taught her. He reassured her that Yue Qianshuang would win in the end and that there was nothing to worry about.[5]

Before she does the ceremony, Fu Su stroked her face with a blood-stained finger. When she went outside and recites the words, her face lit up. It is suggested that Fu Su's blood had an effect on the ceremony, or that it was necessary for it to work.[5]

The Cloud Empress trusts Fu Su greatly, and they are shown to have a deep friendship. She believed him to be quite knowledgeable, but not moreso than Bai Yongxi.[3] When Fu Su appeared hurt, she worried about him. He reassured her worries and calmed her down when she was panicking.[5]

Bai Yongxi was the Empress's older brother figure and teacher. He instructed her on how to run the country from a young age.[3] However, he never spoke to her about the war occurring in Cloud.[5]

Bai Yongxi taught her to play chess, leading her to become an excellent chess player, but never played against her directly. One day the Empress had difficulty with a chess game, leading her search all of the books on chess for the answer, but she couldn't find the answer. Only after watching Bai Yongxi play a game of chess against himself did she understand.[6]

Retrieved from "https://lovenikki.fandom.com/wiki/Cloud_Empress?oldid=101758"
Community content is available under CC-BY-SA unless otherwise noted.