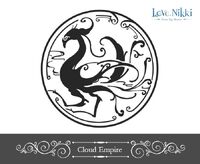 Cloud Empire is one of the 7 Nations and lies on the eastern coast of Miraland. It's a wealthy nation with clothing resembling the ancient Tang Dynasty. Everyone dresses up in a flowing and traditional eastern style.

In the Time Diary, Cloud Empire is described as an ancient and powerful oriental country. It is a place where ancient big cities and delicate small towns coexist. People here are skilled in gorgeous oriental style. 'A nation where ancient civilization and new age shine together'.

Cloud Empire's nobility consists of the Great Four Families Of Cloud: Yue, Bai, Zhu, and Ming. Each holds a key position in the government and/or society of Cloud.

The emblem takes a circular shape with details within it, surrounding a wispy black and white bird.

As one of the oldest nations in Miraland, Cloud Empire has a long and rich history.

In ancient times, the world was guarded by two sisters, Bixiao and Chixiao, who guarded the day and night respectively and could only meet when an eclipse occurred. As the humans grew more and more war-hungry, Bixiao became worried. The eclipse came, and Bixiao was alarmed to discover that her sister Chixiao was just as war-hungry as the humans. Chixiao's power tore Bixiao into four wills of war, and Bixiao realized she had to fight war with war.[2]

From then on, Bixiao was there to stop Chixiao when she became out of control. She managed to seal Chixiao into a circle within the clouds above Brocade City before falling asleep herself, unwilling to see her sister be destroyed and hoping that one day the blood of the emperor could awaken them again.[2]

Early in its history, there were a King and Queen who met when they were young, and were known as King Saint Cloud and Queen Saint Phoenix. The queen was from a low-blooded family, but was very wise and courageous, and came to be admired by every girl in the Cloud Empire.[3]

As an adult, the king of Cloud met an oracle in his dream, and was told to build a tower that scraped the heavens. It took decades to build, and was called the Tower of Zen. The building of the tower was largely opposed by the population of the time, with the exception of the Queen. The emperor asked the most mysterious stylist family of the time to design the ceremony suit, which was designed based on the theme of Dragon-Phoenix.[4][3]

Only an accomplished king could ascend the Tower of Zen and reach the heavens. When this happened, an azure dragon appeared.[4] The queen ascended as well, and phoenix appeared above the tower, its plumes dyeing clouds like burning fire. For this reason, it's believed that the king and queen were reincarnated from the dragon and the phoenix.[3]

In approximately the year 580, the emperor of Cloud decided that Cloud Capital needed to be renovated in order to bring it into the modern day. He recruited the Ming family of the north to redesign the architecture of the city, and they surpassed every expectation. Their designs were accepted and construction began immediately. This resulted in the Ming clan being granted leadership over the north of Cloud.[5]

Cloud is divided up into four geographical parts: Northern, Southern, Western, and Eastern. Each region is ruled by a clan: Ming, Zhu, Yue, and Bai, respectively.

Northern Cloud is a mountainous region that experiences a lot of snowfall, which is traditionally viewed as a sign of harvest.[6] Snowfall City is located there. Yaks and snow leopards, which are seen as guardians of the mountain goddess, are native to the region, especially Snowjade Peak, one of the mountains that divides Cloud from the North.[7]

The region also celebrates a cherry blossom festival each May, when the last cherry blossom blooms to signal the transition from spring to summer.[8]

Southern Cloud is where the Flower Field is located. It is prosperous and beautiful, with rice and design markets at the border. It has a spring-like climate, with lots of rain, and is well-known for its production of tea leaves and flax.[9]

An example of a style that can be found in Southern Cloud is Silver Embroidery, which was created by a girl named Azure and her mother.

Western Cloud's culture has an emphasis on dancers[10] and fortunetellers.[11] Western Cloud also has a history of bandits, which were defeated by Yue Qianshuang and Zhu Ruosheng.[12] It's mostly forested, with railroads being the only way to get around,[13] and it's the only place in Miraland where pandas can be found.[14]

Eastern Cloud is home to Cloud Capital, where the royal court is located.[15] 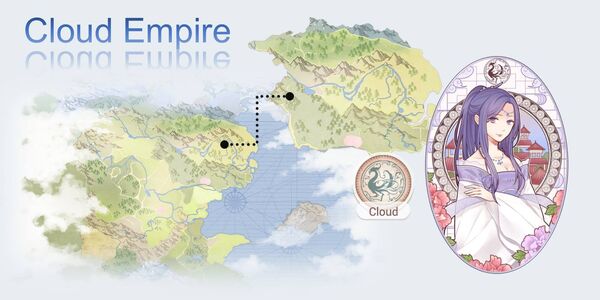 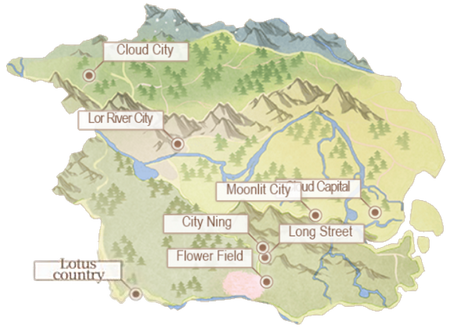 For a list of all locations, please see Cloud Locations.

For a list of all characters, please see Cloud Characters.