Cloud Capital is the capital city of Cloud Empire. It is considered a place of "cultivation, glory, and majesty".[3]

During this year, the then-emperor of Cloud wanted to renovate the city in order to better bring it into the modern era. He turned to the Ming family of Northern Cloud, who were skilled craftspeople. They created exceptional designs for the city which exceeded anything that had been done before, and construction began as soon as they finished the designs. The emperor praised their work and gave them the position of the great family of the north, making them one of the Four Clans of Cloud Empire.[4]

During New Year's Eve one year, Long Street in Cloud Capital had a feast and festivals, which were attended by many people, including Yue Qianshuang, Zhu Ruosheng, and Cloud Empress. The Cloud Empress snuck out of the palace in order to join in the festivities, but got lost and was led back by a fairy. Fireworks were set off at midnight, and everybody finally left before dawn.[5][6]

The royal court is held in Cloud Capital,[7] and is currently run by the regent Bai Yongxi.[8] The Royal Court is generally run by people from the Bai, or Dragon, clan.[9]

Note: This street should not be confused with Long Street which is located at the base of Mount Mango.

Long Street is a street in Cloud Empire where festivals such as New Year's Eve celebrations are held.[5][6] 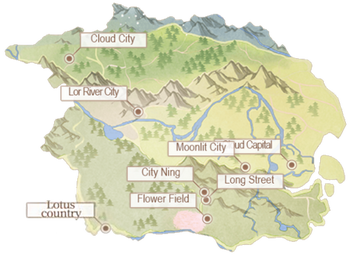 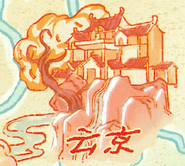