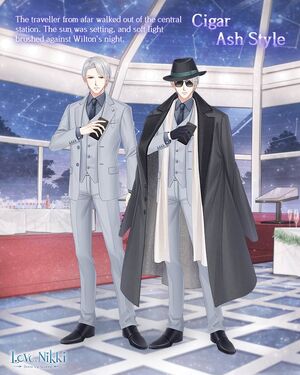 The traveller from afar walked out of the central station. The sun was setting, and soft light brushed against Wilton's night.

A traveler from afar walked out of the noise central station. It's the sunset time and light of Welton is just on.
– Moonnight Starlight


At the entrance, he handed out the invitation which starts with a strange surname, but nobody doubted his identity.
– Grey Suede Overcoat


The show started. The veil on the mannequin was slowly removed, and the dress softer than a dream appealed.
– Retro Trend


When everyone is attracted by Pink Hair on the auction, someone is preparing to lead the auction to another end.
– Top Hat


Outside the hall, he dialed a number, 'Investigate Mercury Group.' Suddenly, the light went out, like a curtain call.
– Suede Leather Gloves


Bai Yongxi hung up the phone. Darkness woke up the fear in people's heart but also gave birth to new hope.
– Changing Times


It's starting to snow. Bai Yongxi walked to the central station. It's just a beginning. Nobody can see the future.
– Tender Falling Snow


When Bai Yongxi left Wilton, in his luggage he carried the latest costume of Apple Federation and a secret letter.
– Vicissitudes

Despite there being two bracelets in the suit, they can be worn together.

Retrieved from "https://lovenikki.fandom.com/wiki/Cigar_Ash_Style?oldid=167521"
Community content is available under CC-BY-SA unless otherwise noted.