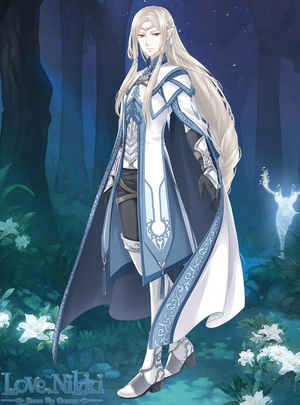 Chloris is a character in Love Nikki. He is the prince of forest elves and a guardian of the Pigeon Forest.

Chloris has fair skin and steel-blue eyes. He has pointed ears typical of a fantasy elf. His blond hair reaches his waist, and is braided at the end, with a circlet adorning his forehead. His hair is parted in the middle, with long forelocks reaching his chest.

Chloris is depicted as wearing a silver chest-piece with an intricate blue and white coat over the top, with layered spaulders and a matching cape. He wears grey trousers, and his silver-white boots are patterned, reaching over his knees. He also wears grey elbow-length gloves with silver gauntlets.

Chloris is a quiet, mostly indifferent person with a slightly melancholy nature.

Chloris can often appear disdainful and apprehensive when faced with strangers, but over time grows to be friendlier. Since elves live in general isolation, and Chloris spends half of his time sleeping, it is possible that his inept social skills stem from a lack of opportunity to converse with others.

He possesses the ability to teleport[2] and fights with the Ice Flame Bow.[11] He has heightened tracking abilities, able to use the wind to direct himself.

Chloris has guarded the Pigeon Forest from its very beginning along with the other elves, and views the task as his responsibility and duty.[12] After the Elf Queen disappeared, Lakris became a guardian of the Pigeon Forest as well, and the two took turns sleeping and guarding for a hundred years each. Though Chloris and Lakris did not interact, due to one sleeping while the other was awake, they were able to sense everything the other experienced through the frontlets they wore,[13] as well as through a fate mark.[14]

Thousands of years ago, Chloris participated in the war between elves and Kindred while Lakris was asleep. Despite the time that passed, Chloris has always remembered the losses that the elves faced, and strives to avoid a similar tragedy.[15]

During this year, Chloris was meant to be asleep while Lakris was awake. However, Chloris was awoken early by Babbi, and Chloris and Lakris were able to meet for the first time.[16]

Lakris strengthened the seal to make sure Chloris wouldn't be awoken again. However, they learned then that Babbi, the dwarf that had woken Chloris up, had gone off to the forbidden Pamir Forest. Chloris insisted on going with Lakris to retrieve Babbi, and so they went together, though under the condition that Chloris stay close to Lakris the whole time.[17]

Together, the two elf princes located Babbi and reassured him before bringing him home. Both Chloris and Lakris stressed that the conflicts of the dwarves and elves were not Babbi's fault, and commended him for being a dwarf that saw past the boundaries between the two races.[18]

Before Chloris went back to sleep, he and Lakris expressed how happy they were to finally get to meet each other after thousands of years of shared experiences. Lakris especially wished that he could have been able to sing a psalm under the moonlight to Chloris, or to discuss their love of the Elf Epic. As they discussed how they could share their knowledge of the elves' history with the world, Lakris encouraged Chloris to lighten up and tell more jokes. Finally, Chloris smiled, just from the experience of talking with Lakris.[19]

This year was the last before Chloris was meant to go to sleep, but before he did, a human girl named Flora happened upon him while he was playing the harp in the forest.[20] He was alarmed by her presence and quickly teleported towards her, but ran away once she started asking him questions. When she followed him, he suggested she return home, but she grew emotional and begged him to be her friend since she had never had one before. Curiously, Chloris offered to meet her again the next night, though he later doubted the decision.[2]

Flora began to visit Chloris every night, and they became friends of a sort, even though Chloris was not used to spending time with others and found her annoying at times. Flora told Chloris about the world outside of Pigeon Forest to Chloris and encouraged him to leave, but he explained that he couldn't leave because it would weaken him.[11]

When Flora hurt herself one day walking in the forest, Chloris carried her back to the manor where she was staying. While he did, he revealed to her that he was immortal and was due to begin a sleep cycle on the midsummer's night. He promised to dance with her and say goodbye the night before.[21]

Unbeknownst to him, she fell ill and was taken away the next day without the chance to say goodbye to him.[22] Chloris went to the manor to look for her, but the butler did not give him a suitable explanation for why he left, and he went to sleep disappointed.[23]

Chloris and Flora only knew each other for a short time during the summer of 580, but both were lonely people and took companionship with each other each day. However, fate was not on their side. Not only could Chloris not leave the forest due to it being the strength of his power, but he also had to go to sleep during the midsummer. Flora, being a young human girl, was not supposed to go into the Pigeon Forest, but did anyways. Additionally, her illness prevented her from staying in Pigeon for as long as she could have.

Though she died while Chloris was asleep, she made a permanent impression on him. His desire to see her once more manifested in Eli's mirror in the year 680: for the first time, the mirror was able to supply him with an appealing illusion. However, even in the mirror, Chloris knew it was only a dream.[24]

Chloris is younger than Eli, indicated by how he referred to Eli as his respected senior.[25]

Their first meeting was not pleasant as Chloris seemed to put a stop to Eli's dreams of crafting the 'Dream Staff'. Not only did he free the creatures whose power Eli was drawing from, he also debunked any claims that Eli's goal of crafting an all-powerful staff would actually work, explaining that the overall styling is more important than any one individual item.[26] However, Eli was intrigued by Chloris, the one elf he'd met who was not susceptible to his illusions.

Their meeting in the year 680 showed Chloris taking more pity on Eli's state of total powerlessness, prompting him to invite Eli to use his power for a more educational purpose. Later, while Chloris shows Eli's mirror to younger elves, he warns them not to call Eli a "bad elf", as it could anger Eli.[27]

Gray Raven has a special interest in Chloris, never having met an elf before, and seeks to use him for experiments.[4]

In Greek mythology, Chloris refers to a goddess or nymph of spring, flowers, and new growth. Her Roman name was Flora.

Chloris and Cesare from the Old Album gallery

Chloris and Elle
Add a photo to this gallery

Retrieved from "https://lovenikki.fandom.com/wiki/Chloris?oldid=126041"
Community content is available under CC-BY-SA unless otherwise noted.