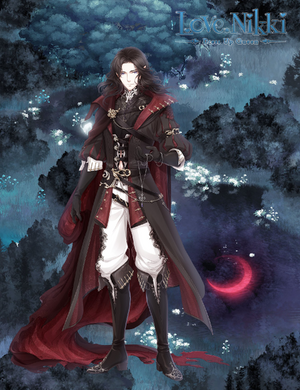 Cesare is a character in Love Nikki. He is the current ruler of the Kindred and Chloris's twin brother.[7]

Cesare has shoulder-length, slightly wavy black hair, pale skin, narrow purple eyes, and pointed ears. Beneath his chiseled lips are pointed fangs.[11] He wears a long black and red coat, a black shirt, white pants, and black gloves and boots. He holds a cross necklace. Until the year 670, Cesare also kept a sword called the Dark Verdict with him at all times.[12]

Cesare looks distinctly similar to Lakris. Though it is not visible in his sprite, he also has a distinctive elfen mark on his wrist that emits a dim light.[11]

Cesare is a deeply jealous person. Because he was a Kindred, he was prevented him from enjoying a peaceful life like his brother, and he lost everything he cared about as a result of the war between Kindred and Elves. He has a cool and composed manner of speaking, and after a thousand years of being exiled from Pigeon Forest, he has no issue using violence to take back what he can from the elves.

In an age when the Kindred still lived in the Pamir Forest, Cesare was born to the Elven Queen and the Lord of Kindred. The Elven Queen was an elf and the Lord of Kindred was a kindred, and the fact that they belonged to two different species meant that they could not be together. It also meant that Cesare could not be with his twin brother, Chloris, and he never once met him as a child.[7]

Cesare was close with his mother, and they would often sit together in the forest and watch thousands of Dazzle Butterflies fly past. However, the elves were at odds with the kindred, and conflicts grew as time went on. Cesare's father the Lord of Kindred believed that disagreements should be settled with strength, and Cesare agreed, but his mother the Elven Queen did not want bloodshed. One night, Cesare overheard an altercation between the two, in which his mother told his father that she wanted all the Kindred to leave the forest.[7]

The Elven Queen came one last time to say goodbye to his father, and Cesare pleaded with her to change her mind about forcing the Kindred to leave the forest. However, even though it was a painful decision for her, the Elven Queen did could not go back on her orders. She walked away from Cesare, abandoning him for good.[7]

Cesare later received news that she, too, had passed away. Even though Cesare had inherited power from his father, everything he had loved had disappeared one by one.[7]

Occasionally, he would hear a zither playing. One day when Cesare went to the edge of Lake Bovaly in Shadow City, he saw Chloris was the one playing the music. He knew immediately, even though he had never seen him before, that Chloris was his twin brother.[7]

At some point, Cesare ended up at the bottom of the lake. Different interpretations are given to show how he got there, one states that he was dropped into the lake by the elves,[8][13] while the other states that he fainted and fell in.[7] At some point, the Elven King put a seal on Cesare, which trapped him there.[12]

During this year, Nidhogg visited the Pigeon Forest. He swam down into Lake Bovaly, where Cesare was at the bottom of the lake. Cesare gave him the kindred-made sword Dark Verdict, and Nidhogg stabbed him with it. This action invoked the power of blood, which freed Cesare from the seal set upon him by the Elven King.[12][14][15][13][16]

Cesare was able to take form in the Pigeon Forest, and made a home in a castle called the Death Castle.[17] He began to attract people who lived in the forest, luring them to him with promises of banquets, wealth, and wine. Dwarves which had previously lived an undisturbed life were being tempted towards yielding to Cesare.[18]

A conflict arose in Dwarf Town of the Pigeon Forest, in which the humans accused the dwarves of stealing a treasure of Duke Cesare, a jewel-studded necklace.[1] Noah escalated the conflict by using his magic to hide a fake in the Dwarf Chieftain Holtby's hat, as he was eager to make Holtby meet, and make amends to, Duke Cesare. The issue was only resolved when Chloris stepped in and revealed the illusion.[19] However, Noah transformed the fake necklace into an invitation for Chloris to visit Cesare, before he disappeared.[18]

Chloris considered the fluctuating power in the forest and the strange winds, which were so abnormal that even Lakris woke up.[20] He and Lakris decided to pursue Cesare in order to best protect the Pigeon Forest.[21] Together, they went into the northern Pamir Forest with an army of forest elf warriors. However, a black mist surrounded them, and Lakris disappeared, leaving Chloris no choice but to investigate within the castle that loomed ahead.[17]

Chloris entered alone to find Cesare sitting on a throne and Lakris lying in a coffin, close to death. Cesare implied that Lakris was gone and told Chloris that Lakris was a part of him that was taken.[11] Cesare insisted that Lakris never truly existed in the first place, despite Chloris' protests.[22]

Chloris banished Cesare from the castle by taking out his Dawnblade, which brought morning rays into the room. Though the dawn brought pain, Cesare remained unfazed by it, admitting that he appreciated the pain from the sunrise that reminded him he was alive. He slowly faded into the mist with the promise that he would meet Chloris again soon in Shadow City.[22]

Later that year, Nikki, Mela, and Momo were unknowingly led into Shadow City. When Chloris found out, he made the decision to open Shadow City once more. Similarly to Cesare's father opening Shadow City a thousand years before, this action took much of Chloris' strength.[23]

Cesare finally escaped Shadow City, and confronted Chloris, where he told them that the Kindred would show that the peace that the forest faced for the last thousand years was only an illusion. He then bit into Chloris' wrist, weakening him further and allowing their memories to finally converge.[23]

Cesare is a surname with Italian origin, from the Roman family name Caesar.[24] Caesar, and many words originating from it such as Kaiser, is used as a title for emperors and empresses in many nations and languages.[25]

Cesare (bottom) and Chloris (top) in the Time Palace event

Cesare (top) and Chloris (bottom) in the Stele Sphere event

Cesare in the Stele Sphere event

Retrieved from "https://lovenikki.fandom.com/wiki/Cesare?oldid=171316"
Community content is available under CC-BY-SA unless otherwise noted.