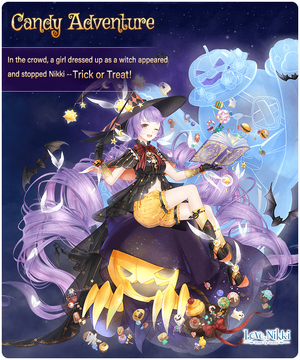 In the crowd, a girl dressed up as a witch appeared and stopped Nikki -- Trick or Treat!

Candy Adventure is a Festivals suit that could be obtained from the Colorful Halloween Game Event. It can now be obtained through Recipe Crafting.

The real witch will appear in the Halloween party. If anyone asks you for candy and you refuse to give, you will be punished.
– Mysterious Tale in Halloween

The moon is visible in the sky. Little witch wanders through the bustling crowd with a lollipop in her mouth.
– Night of Witch


Are you questioning my magic? I'll let you see, 'pumpkin, give me magic...' Well, this one doesn't count. Just stay there!
– Pumpkin Bloomers


The girl with pink hair and a fat cat looks special. They must have many candies!
– Honey Taffy


These candies are not enough. I need more... Ah, Halloween celebration is almost over!
– Wings of Magic


We witches walk between darkness and moonlight. We are noble yet cold-blooded! I'm not kidding. I will turn you into a pumpkin!
– Flying with Stars and Moon


The witch is popular with nearby kids, but it's not only because she can make candy or even grilled fish with her magic book.
– Colorful Magic book


How can people go to the celebration without candies? Ready to accept the witch's punishment! Ding ding ding--become a pumpkin!
– Maple Sugar Prank


In the parade, the witch asked a passer-by for candy and did a magic for him in return.
– Surprise Moment


After collecting enough candies, Nikki finally found the witch. Momo is asleep in her arms with grilled fish in its mouth.
– Dream of Marshmallow


In the crowd, a girl dressed up as a witch appeared and stopped Nikki--trick or treat!
– Crazy Adventure of Candy


Because Nikki didn't have any candies, the witch left. She turned Momo into a pumpkin in a flash. No one knows how she did it.
– Game of Witch


Little witch gave away the collected candies to vagrant kids. And they watch fireworks together.
– Midnight Carnival

Candy Adventure describes the annual Halloween celebrations in Bullin Town, Lilith, as indicated in the event text. Nikki attends with Momo, and the two are spotted by a witch who thinks they probably have lots of candy. However, there is a rule in place at the celebration: if someone asks you for candy and you can't give them any, then you will be punished.

Nikki and Momo find this out firsthand when the witch asks them for candy and they don't have any. The witch immediately turns Momo into a pumpkin, and Nikki goes off to find candy so that the witch will turn Momo back. After collecting candy (the event), she finally found the witch, who turned Momo back again. At the end, the witch gave away the candy to children at the festival, and together they watched fireworks.

Retrieved from "https://lovenikki.fandom.com/wiki/Candy_Adventure?oldid=161429"
Community content is available under CC-BY-SA unless otherwise noted.