Love Nikki-Dress UP Queen! Wiki
Register
Don't have an account?
Sign In
Advertisement
in: Characters, Recurring Characters, Females,
and 3 more

小寻
Cali is a character in Love Nikki. She is a journalist that works for Amphithea News.[1]

Cali has large blue eyes and wears thick, round glasses. Her blonde hair is tied up and mostly kept under a brown tartan hat, with the exception of a lock of hair that hangs down. She considers that lock of blonde hair her signature look.[3] She wears a professional British-style journalist's outfit and has a camera around her neck. She has long striped white socks and brown and blue shoes.

Cali is always chasing the newest and most promising story. She's extremely ambitious; even from a young age, she was one of the top students in school, and always dreamed of being a journalist.[4] In her career, she is willing to do things like climb through sewers[5] and sneak onto airships[6] in order to be where the action is. It's said that she can run faster than anybody when there is breaking news.[3]

She also shows a great appreciation for history and society. She knows all about the geography and culture of all seven countries, believing it to be integral to her ability as a reporter.[3] She is also very well-versed in the story of Yunikina,[5] and she carries around poems that Yunikina's lover Eagle wrote.[3]

Cali was top in her class during school before graduating, and aspired to become a journalist. She cut her hair short before going to work at the Amphithea Group.[4]

Cali was near Cloud City in order to report on the invasion on Cloud, and met Nikki and her friends while they were trying to find a way in. When they told her about how they needed to save Lunar, Cali jumped at the chance to hear a story and showed them her secret way into Cloud City through the sewers.[1]

They saw Nidhogg and Lunar, but were stopped by Ozeca. Cali recognized her and told Nikki and her friends who she was, also giving the background behind Yunikina and the Icewind Warchant.[5]

Cali secretly boarded the Iron Rose airship with Nikki and her friends in order to keep up with the news and action. She brought up Nidhogg's necklace, remarking that it was unique and that the pendant started shimmering when everyone fell over. Ransa agreed, saying that the necklace was probably the key to undo his evil plans.[6]

Shortly afterwards, Cali received word that the Apple Federation Apparel Group had appointed Charles as president, replacing Chairman Schiller, Kimi's father, after he was absent for over a week. She prepared to leave for Apple in order to investigate.[7]

Nikki and her friends ran into her again in Welton, where she tipped them off that she had written an article that would show up in the next edition of Amphithea News, though she couldn't say anything about it yet.[8] 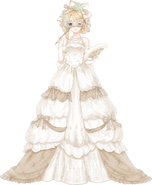 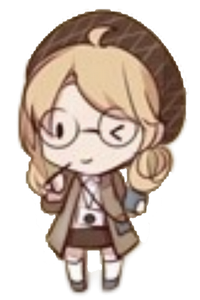