Caelum et Ocean is a set of Story Suits. When you obtain the Ocean Dream and Winged Journey suits, which can be obtained from the Caelum et Ocean Event, you will unlock a story.

In the Dew Ocean, as the sea waves roll in the light of the summer sun, a blue tailfin flickers beneath the water's surface. Ellisa, the Mermaid Princess, peeps out from the waves, her light, golden hair glistening with seaspray.

With nary a storm or boat to be seen, only the constant rumble of the waves greets her today.

'A little mermaid touches the sky for the first time/ She flips through the air and bathes in the sunshine/ she looks up at the beautiful sky and/ Sings a song about a distant land/ But there are no ships, no sailors, o prince here/ So when will the stuff of her dreams appear?/ What does the land at the end of the ocean look like...'

The purest, most beautiful voice in the entire Dew Ocean lightly sings of her yearning for the land and the sky overhead.

'O little mermaid, would you like to hear a story about the land?' asks Pheral, the Seagull, as she glides down towards Ellisa. 'The land is a wondrous place, a place a little mermaid like you couldn't begin to imagine! The girls there dress themselves in veils and flowers, waving their beautiful hands as they dance...'

This summer, Pheral would come to Ellisa every night to tell her stories of the land, and Ellisa would weave them into beautiful songs to be sung on the waves of the Dew Sea.

At summer's end, Pheral waves her wings at Ellisa in farewell, telling her that she must travel south for the autumn and winter. She promises to return next summer to bring Ellisa even more exciting stories from the land.

Until next summer, my dear friend!

Pheral the Seagull was born on a distant island in autumn. One of Miraland's most courageous adventurers, she flies, year after year, over seas and continents, over mountains and forests. She knows how the people from different countries live, and even knows what the roses in their flowerbeds dream about.

On the last day of summer, Pheral said farewell to her mermaid friend Ellisa, promising to return from the south next summer with new stories to tell her. Ellisa was dismayed and reluctant to see her friend go, but hopeful for her return, and sang her a song expressing her feelings as she flew away.

Many summers passed over Dew Ocean, but Pheral never did return.

Ellisa, still believing in her friend's promise, waits expectantly every summer, singing about her friend and her long wait. She sings of their encounter, an encounter between sky and sea, and seabirds of different shapes and sizes carry her song to every corner of the world.

Finally, one day, a seabird brings Ellisa a faded rose, the new story Pheral had promised her long ago. Pheral could not come back here, but she never forgot her promise, and asks that Ellisa wear this rose in her hair to remember her by. Tears roll down the mermaid princess' face and onto the dead rose... and with her tears, it comes back to life, brightly waving in the seabreeze.

The sky and the sea, the mermaid and the seagull, a promise in the north and a story from the south... Something other than the constant ocean waves can be heard echoing over the sea: a summer song.

Gladys, the Pearl of the Deep Sea, created a statue with her ancient, precious pearl and named it The Song of Summer Ocean.

A commemoration of the encounter between sky and sea.

The Song of Summer Ocean 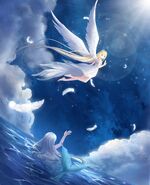 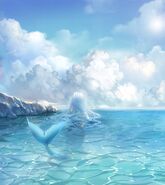 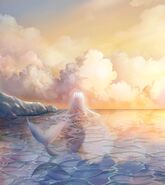