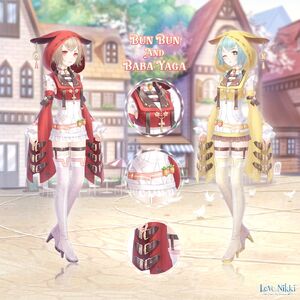 Bun Bun and Baba Yaga is a Lilith suit that can be obtained through Recipe Crafting.

In the east of the forest lives cute Bun Bun.
– Cute Twist - Linen

In the day, Bun Bun would collect sweet carrots and clear spring water in the forest.
– Bun Bun - Strawberry

In the night, Bun Bun would tell bed stories for her sisters, 'Be a nice girl or Baba Yaga will come for you!'
– Carot - Strawberry

In the west of the forest lives the horrible Baba Yaga.
– Cute Twist - Ocean

Nobody dares to enter the forest in the night as Baba Yaga's cries are so scary.
– Bun Bun - Sweet

Baba Yaga never shows up in the day as the sunlight burns her eyes.
– Forest Boots - Sweet

In the day, Baba Yaga falls into sleep. In the dream, she becomes a little rabbit and doesn't fear sunlight anymore.
– Carot - Sweet

The original suit tells the story of Bun Bun, who lives in the east of the forest. She collects food and water and makes dinner for her sisters, and in the night, tells them stories about the terrible Baba Yaga. In the customized suit, the suit tells the story of Baba Yaga, who lives in the west of the forest, opposite from Bun Bun. She can't go outside in the day, as the light burns her eyes, and nobody enters the forest at night due to her terrible cries. In her dreams, she turns into a rabbit who can go out in sunlight.

Retrieved from "https://lovenikki.fandom.com/wiki/Bun_Bun_and_Baba_Yaga?oldid=146213"
Community content is available under CC-BY-SA unless otherwise noted.