Brocade City is a city in the east of Cloud Empire governed by the Clan Bai. It is considered a blessed land, and worship rituals are held there.[1]

Brocade City was built by an old king many years ago.[1]

The Cloud Empress was taken to Jinlin Palace in Brocade City and locked inside a room alone. She could hear the sounds of battle from outside the room, but only had a palace maid to talk to, who assured her that General Yue Qianshuang was leading the fight and that Bai Yongxi would be arriving soon.[2]

Fu Su entered the Empress's room then, presumably from the battlefield, and explained that the situation was chaotic because the enemy wanted to steal something. He took her to the great hall of the palace, and she recited an incantation that Bai Yongxi had previously taught her.[2]

At the same time, Yue Qianshuang and Zhu Ruosheng were fighting in the Snowfall Hills to break through to the west, though their troops were too few to carry on and they could not get reinforcements. The main force withdrew into the walls of the city, while Yue Qianshuang and some of her elite soldiers attempted to carry the fight despite the fact that they would likely lose. A chain from an unknown place appeared out of nowhere and captured Qianshuang.[3] However, Ming Shuiyuan traveled from South Cloud to save Qianshuang.[4]

Jinlin Palace (晋林宫, Jìn lín gōng) is the palace in the center of Brocade City. A royal ritual is held here annually. The Cloud Empress has participated in a ritual here involving praying for the previous drought.[1] There is a great hall with a platform, as well as a room with a blanket in which the Cloud Empress was once kept during the war.[2]

The Celestial Garden (灵囿, Líng yòu) is the royal zoo of Brocade City, best known for its birds that are said to bring auspiciousness and luck. It is full of lush plants and lots of water, and is home to species such as carps and birds that have the freedom to move around as they wish.[1] When they created their long-tailed tit exhibit for the New Spring Ritual in 680, they opened to the public for free and allowed anybody who wanted to feed the birds.[5] Nikki and Cali attended this exhibit, and Nikki fed rice to the birds.[6]

The Cang River (苍河湾, Cāng hé wān) is a scenic river that people can ride boats down. It is the inspiration for many poems and designs.[1]

The Snowfall Hills are just outside the walls of the city, and served as a battleground.[3]

The Blue Sky Tower is a mythical, divine palace that is rumored to float above the city. It is said to have been put in place by the goddess Bixiao to protect the country,[7] and it seals Chixiao, who is prone to starting wars, and her four wills.[8] Zhu Yuxian believes that the Blue Sky Tower itself is an omen of war.[7] 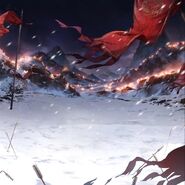 The Jinlin Palace in the rain