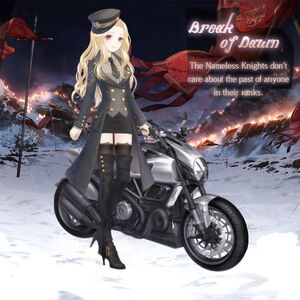 The Nameless Knights don't care about the past of anyone in their ranks.

Break of Dawn is a Hidden Suit that can be obtained from Louie's Dreamland, Nameless Knight.

Nameless Knights of legend, traversing life and death, cannot appear before the living, nor can they receive dawn's baptism.
– Break of Dawn

He has always been in search of the Nameless Knights. They protect an important secret in Miraland, that of eternal peace.
– Officer Uniform

The Nameless Knights don't care about the past of anyone in their ranks, but what was once forsaken cannot be on any tombstone.
– Tactical Wind Coat

A picture, a scar on the right cheek and people one can never see again. Perhaps no one can completely forsake their past.
– Black Stockings

He writes letters every Christmas. But they don't have an addressee, nor a signature of any kind; they will never be posted.
– Night of the North Kingdom

Christmas carols reminds him of her. He has forsaken his name and his past, but he still can't forget that flower field.
– Secret Agent Cap

Perhaps they can meet again. Perhaps he can watch her from afar, watch her in the soft moonlight, only to vanish in the snow.
– Revolver

The suit is about both Louie and the Nameless Knights. The Nameless Knights are a legendary group that protects the secret to Miraland's peace, and those in their ranks forsake their names and past. Though Louie joins after searching for them, he cannot completely forget the things he cares about, especially Lunar. He still writes letters to her each Christmas, and Christmas carols make him think of her.

Retrieved from "https://lovenikki.fandom.com/wiki/Break_of_Dawn?oldid=135812"
Community content is available under CC-BY-SA unless otherwise noted.