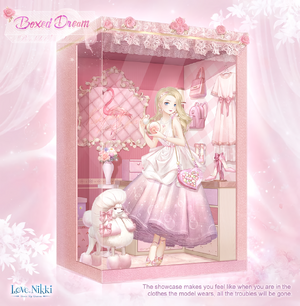 The showcase makes you feel like when you are in the clothes the model wears, all the troubles will be gone.

Boxed Dream is an Apple suit which could be obtained from the Dream Showcase event.

On the shelf of best sellers, Clara in Showcase takes a central position. It's a dream about a girl and dream.
– Golden Prelude

Clara is a model in the showcase. Her starry eyes grant any clothes put on her absolute charm.
– Rose Roam

One day, the shop owner found the magic of Clara. Instead of putting more effort on design, he was taken by greed.
– Clouded Star

He put Clara in all the terrible designs, but people just paid high price for Clara's own charm.
– Neon Road

After that night, Clara lost her starry eyes. The true face of the poor clothes was revealed.
– Dream Hut

The only partner of Clara in the showcase. Though they cannot communicate with each other, Clara likes it.
– Miss Cotton Candy

This pains Clara for she cannot accept those trashes were sold at such prices. That's an insult to the real design.
– Shiny Love

Clara is tired of all this. She wishes to design something real, but as a model, she can do nothing.
– Peach Heart Dream

It's a magical night. When a shooting star crossed the sky, Clara saw the hope. A fairy came to her.
– Shooting Star Miracle

Fairy sprayed the perfume onto Clara who gained the freedom in the night at the cost of her unique charm.
– Chrysanthemum Fragrance

A normal puppet owned a soul by a mistake. Her previously lifeless eyes were infused with the starry grace.
– Rose Star

Fairy told Clara that if she could win the favor of the passersby with her own design, she will gain freedom.
– Boxed Dream

The showcase makes you feel like when you are in the clothes the model wears, all the troubles will be gone.
– Fantasy Showcase

The story tells the story of a doll named Clara who owned a soul by mistake. The owner of the shop she was in was overcome by greed, and began to put her in ugly clothing, but she still sold well because of her natural charm. This annoyed her, and her charm faded, revealing the clothes for what they were.

She made a wish upon a star that she could design her own clothes, and a fairy came to her and gave her life by spraying perfume on her. She lost her special charm, but she was finally alive. The fairy told her that if she could win the favor of passerby with her own designs, she could be free.

Retrieved from "https://lovenikki.fandom.com/wiki/Boxed_Dream?oldid=145734"
Community content is available under CC-BY-SA unless otherwise noted.