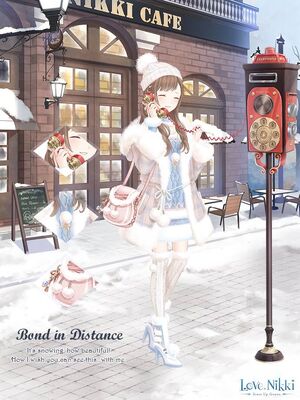 It's snowing, how beautiful! How I wish you can see this... with me.

. Completing this suit will allow the player to claim the Warmth Nearby suit.

In the Wheat Field Train Station, Rina sat on a bench and waited for Shawn, her lover, to pick her up. They were former classmates who fell in love, and decided to celebrate their one-year anniversary in Wheat Field's Apple Town, located along the border of the Lilith Kingdom. They could have spent the entire day celebrating, but the trains ran late and the day was nearly over; there wasn't enough time to even leave the station for a nice stroll through the town.

Looking at the other passengers carrying away their luggage, she remembered the day Shawn saw her off to Lilith. The station was bustling with people; Shawn patted her on the head and told her to take care. Playfully, she warned him to keep his distance from other girls. The two then fell into silence, neither willing to be the first to say farewell. Finally, Rina picked up her luggage, joking that if the train left, she would be back much earlier than expected. Her tears fell as she turned to walk away; when the train finally started to depart, the two waved at one another until they became tiny black dots in the distance.

When she returned from her reminiscence, she realized that it would be the first time the two saw each other since they were in school together. Suddenly, a shadow looked over Rina, and a pair of hands covered her eyes. A familiar voice spoke into Rina's ears:

'Hello, my fair lady, and welcome to our custom-made, luxury trip: an exclusive tour of our scenic Wheat Field Train Station!'

To realize my dream, I came to Lilith design school. The phone became the only way we stay together.
– Bond in Distance

After the school opening, I realized that the school actually has a long history.
– Unknown Joy

For the anniversary, I secretly plan to return to Apple to give her a surprise.
– Arranged Surprise


When I walk on this strange street, I always think about what you are doing right now.
– Sudden Thoughts


It's snowing. It's so beautiful here. How I wish you can see this.
– Snowy Night


What if you have the skill to not get fat no matter how much you eat?
– Casual Imagination


I remember that you used the necklace pretending to open your chest. You want to give me your heart.
– Key for Heart


I bought a new plant and maybe next time when school begins, it may blossom then!
– Warm Sunshine


I'm in your school! You remember what day is today?' 'What? You're in Lilith? But I'm in Apple!'
– Help Laughing

With the suit Warmth Nearby
Add a photo to this gallery

Retrieved from "https://lovenikki.fandom.com/wiki/Bond_in_Distance?oldid=162759"
Community content is available under CC-BY-SA unless otherwise noted.