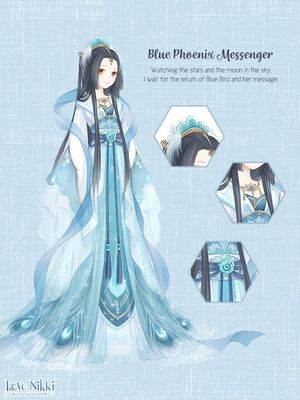 Watching the stars and the moon in the sky, I wait for the return of Blue Bird and her message.

The last vision the girl has in the world is the Blue Bird. She never knows if it's true.
– Blue Phoenix Mirror

Watching the stars and the moon in the sky, I wait for the return of Blue Bird and her message.
– Moonlit Blue Phoenix

When Blue Bird fails to deliver the message of love, the Lilac seems to be sad in the rain.
– Twilight Phoenix

I want to walk on the North land you deeply and search for the most beautiful flower in the night.
– Blue Phoenix Terrace

When Blue Bird meets the Fire Phoenix, their love will last to the end of the world.
– Blue Bird in Dream

In the mist, the Blue Bird's figure gradually disappeared. We step on the different paths.
– Mirror Solitary

She remembers the danger she strayed into the world as well as the warm hands in the Tower of Zen.
– Bird Messengers

In its whole life, Blue Bird only pursues and protects what she loves.
– Phoenix Messenger

She doesn't she is the lucky bird in Cloud myth. She only wants to follow one who won't fail her.
– Spring Harbinger

She believes in the master's word that one day she will be a bird.
– Auspicious Bird

The way to heaven is not a smooth one, but the Blue Bird will explore the way for you.
– Blue Birds Carry Jade

The suit refers to Lunar's phoenix, Blue, which delivered messages between Lunar and Louie for years. It refers to how she originally was found by Lunar's uncle, Sue, at the Tower of Zen, before going to the North Kingdom to follow Louie, delivering messages between the two of them until Louie made the decision not to send his last letter. Finally, she found Lunar again, flying above her as she died in Cloud City. She was the last sight Lunar saw before she died.

It also references the myth which was told to Lunar as a child by her uncle Sue: "As the legend has it, Blue Bird spends all its life looking for Fire Phoenix. Once they meet, nothing can separate them till the end of the world." The Blue Phoenix protects what she loves and searches eternally for the Fire Phoenix.

The suit and its evolutions

Retrieved from "https://lovenikki.fandom.com/wiki/Blue_Phoenix_Messenger?oldid=144171"
Community content is available under CC-BY-SA unless otherwise noted.