Blood Beckon is a Pigeon suit that could be obtained from a Cumulative Recharge from January 24th to January 30th, 2019, for at least 1460

. It also came with the background Red Moon Hall for at least 2010

Under dim light, giant blood wings spread slowly. This is kindred Cardis, embodiment of all the ominous
– Moon Song

Cardis's power is intimidating. Few kindred could match her, say nothing of weak, mortal, and boring humans.
– Blood Flame

After a long sleep in the scroll, Cardis was summoned by the only girl left in Demon Hunter family.
– Awakening Power

Greedy girl? What is it you desire? Hatred, memory, family, or glory, I can give you anything but death.
– Deep Dream

Eyes of Cardis fixed upon April. Scared and trembling, she seems to be ready for the last strike.
– Blood Crown

The blood of April is the biggest temptation, like a light in the night from which you never move your eyes away.
– Tempting Brew

But behind the fear, Cardis saw the fire of vengeance and desperation. They moved the cold heart of the kindred.
– Burning Gauze

The fingertip of the kindred went cold. She placed a rose beside the pillow of April, its edge withering already
– Broken Rose

The time means so little in such a long life of Cardis. She finally found some comfort from feeling 'alive'.
– Peak of Divine n Devil

April's vengeance finally ended, but Cardis's hunt has just begun. She relishes the loneliness and desperation.
– Tear of Blood

The manor turned into a dark but glorious cage. April's blood is the highest award for Cardis
– Night Incinerate

Under the pale skin, sweet blood is like trap that seized the only weakness of Cardis. Who is the prisoner?
– Age Curse

The suit represents Cardis, a kindred described as "embodiment of all the ominous". Her power is intimidating with very few kindreds being able to match up to her. Sleeping in a long scroll before, she was then summoned by April—the last girl of the Demon Hunter family—and the two formed a bonding contract. Cardis asked her what she desired, be it hatred, memory, family, or glory—anything but death. April was scared at first but gave her plans to Cardis, and Cardis coveted her. April's blood was Cardis' biggest temptation, but her cold heart was moved when she saw what lied beyond April's fear: the fire of vengeance and desperation. For someone like her who lived a long life, Cardis finally found some comfort from feeling "alive".

Even after April's revenge they were still bonded; for Cardis, this was just the beginning, for she relished April's loneliness and desperation. The manor turned into a prison and Cardis drank April's blood as the highest reward. 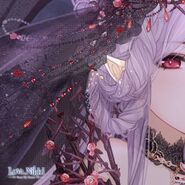 Add a photo to this gallery
Retrieved from "https://lovenikki.fandom.com/wiki/Blood_Beckon?oldid=96175"
Community content is available under CC-BY-SA unless otherwise noted.