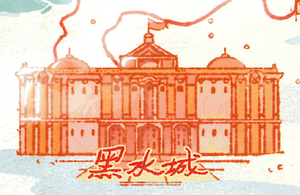 Black Water City is the capital city of North Kingdom. It is best known for being the stronghold of the Knight of Kingdom.[2]

During this year, Nidhogg came to Black Water City. He was taken in by Louie's father, the Knight Commander of the Knight of Kingdom, and became Louie's adopted brother.[1][3]

Nidhogg became a knight of the Knight of Kingdom during this year. He passed on the first try.[1]

During February of this year, Agata came to Black Water City to apply to become a knight. However, she was rejected because she was only thirteen. After training hard, she finally became a knight later that year.[1]

Later, the knights were ambushed by another group of soldiers. These soldiers were taking a potion that was available only to the elites of Black Water City, which suppressed the backlash from the Blood Curse and made it so that they could fight without feeling pain. Louie's father was so overcome with the pain from the Blood Curse that he died, and after that, Nidhogg and Louie both left the Knight of Kingdom.[4]

Ray, another knight that had been ambushed, sent a letter back to his mother, a tailor shop owner in Black Water City, explaining what had happened and that the knights had been made into "the laughing stock of the world".[4]

During this year, the League Tyr army was formed by Nidhogg. It planned an attack on the Cloud Empire due to them allegedly having a treasure from North Kingdom. The North King believed this was arrogant,[5] and urged the people of Black Water City to rise up against League Tyr. However, Tyr was able to successfully attack and take over Cloud City.[6]

The king resides here. It is guarded by soldiers that line the path with axes in their hands.[1]

Nearby, there is the Knight Office, where Agata works during the year 680. The office has an inner room, and Agata keeps her diary in her office.[1]

Retrieved from "https://lovenikki.fandom.com/wiki/Black_Water_City?oldid=126208"
Community content is available under CC-BY-SA unless otherwise noted.