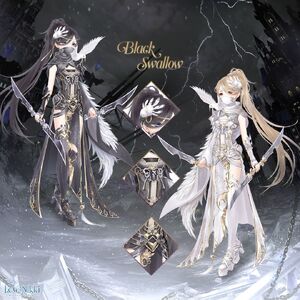 Black Swallow is a Cloud suit that could be obtained through Evolution of princess drops from V2: Chapter 4 Silent Forest.

Since she remembers, she has short hair like a boy. She envies other girls but she has no choices.
– Twin Swallow Dance

Dive in the night in a black assassin suit and nobody will escape her hunt. She's brought up as an assassin.
– Black Swallow

In the moonlight, she feels she's like a little swallow when she moves silently on the roofs, but she never rests.
– Night Flight

As she grows up, she starts to feel guilty whenever strange blood coats her hands, but she's too weak to say no.
– Stunning Shadow

The rumor goes that she's the ace assassin of the organization. She's like a dagger brighter than the moonlight.
– Cold Moon Edge

She just wants to be a normal person... But as she becomes a better assassin, this becomes less possible.
– Cold Water Mist

Like a flower in the abyss, she lives in a nightmare. She wants a ray of light to wake her up.
– Swallow Returns

She grasps the name list tight. Her new mission target is the young bookman who lives on the outskirt.
– Twin Swallow Dance - Rare

As she moves, she runs into another assassin sent by the organization and the bookman blocks a strike for her.
– Black Swallow - Rare

She's thrown into the prison with the bookman. She dare not to imagine what will happen when he knows who she is.
– Night Flight - Rare

What's surprising is that the bookman knows her long ago, not as an assassin, but like a little swallow.
– Stunning Shadow - Rare

Tears brim out eyes and fall onto the chains. She's been through so much, but it's the first time she cries so hard.
– Cold Moon Edge - Rare

'You can choose your future. I know the past is bad, but please believe in yourself.'
– Cold Water Mist - Rare

The bookman's words are like a ray of light, dragging her out of the bottomless mire into the sunlight.
– Swallow Returns - Rare

Under the moonlight and on the high roofs, she stands high with her hair fluttering in the wind.
– Twin Swallow Dance - Epic

The ace assassin disappears overnight. Nowadays, she assumes the title of 'Black Swallow' and is known as a heroine.
– Black Swallow - Epic

With the twin blades in her hands, she thinks of the bookman from time to time. Maybe they could meet again.
– Night Flight - Epic

Swift like the wind and intangible like the moonlight. Nobody ever saw her face under the mask.
– Stunning Shadow - Epic

Brilliant moonlight dances on the black iron. She walks in the shadow but tries her best to protect the light.
– Cold Moon Edge - Epic

Something flashes the silver light under the moon. A black feather nailed on the red door is the symbol of death.
– Cold Water Mist - Epic

Nobody knows the whereabouts of the bookman. The first light in her life disappears, but the fire is kindled.
– Swallow Returns - Epic

The moment he saw her, he knew who she was. The organization's way of training newbie really doesn't improve.
– Black Swallow - White

Under the cover of a bookman, he's an information peddler. He has a thousand traps for those who go after him.
– Night Flight - White

He sees all of her hesitation and struggles. A killer with a good heart. He doesn't know what he feels.
– Stunning Shadow - White

He sometimes drinks and talks with her, but with different identities. She's a secret light hidden in his heart.
– Cold Moon Edge - White

She's so like him. Brought up by the same organization and harboring similar self-denial, he chose to give up.
– Cold Water Mist - White

He gave her a hand, still. He helped her leave the organization, wiped away her past, and hid in the dark himself.
– Swallow Returns - White

Black Swallow is about a girl who was brought up as an assassin, She had no choice in the matter even though she didn't want to be one. She had to keep her hair short, which meant she envied other girls her age. The better she became at being an assassin, the less it felt like she'll ever be able to become a normal person again, but she couldn't help but feel guilt when she had someone else's blood on her hands.

Once, she was sent on a mission to target a bookstore owner. However, on the way, she ran into another assassin from the same organization. The bookstore owner blocked a strike for her, and both of them ended up in prison. She was scared of what he'd do once he found out her true identity, but to her surprise, he recognized her from when she was little. She was overcome with emotion and cried as he gave her words of encouragement, telling her that even if her past was bad, she could control her own future.

She took his advice to heart, and left her assassin past behind. She became a heroine who went by the name Black Swallow and worked to protect the light. Though she didn't know the whereabouts of that bookstore owner, she always thought about him and wondered if they would be able to meet up again.

The truth was that he wasn't just a bookstore owner. He was an ex-assassin too, and had been trained by the exact same organization. That allowed him to see her for what she was: not only an assassin, but one that had a good heart who struggled with killing people. Under the cover of a bookman, he peddled information and skillfully trapped those that tried to target him. Though Black Swallow didn't realize it, he continued to meet up with her occasionally under different identities, helping her leave the organization as well as having drinks with her.

Retrieved from "https://lovenikki.fandom.com/wiki/Black_Swallow?oldid=146286"
Community content is available under CC-BY-SA unless otherwise noted.