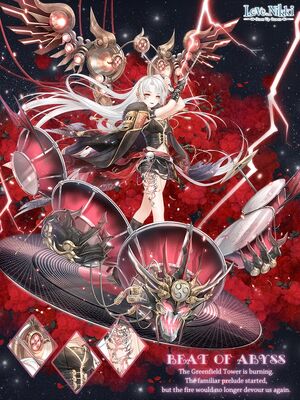 The Greenfield Tower is burning. The familiar prelude started, but the fire would no longer devour us again.

Beat of Abyss is a North Kingdom suit that appeared in the Night of Starfall Event.

The burning fire lights up the dark sky. The wood unwilling to be consumed collapsed and fell.
– Lucifer

From the mortal world to Abyss, though Rubbit held me tightly, all the memories came back.
– Unique Past

There is always an opposite side of justice. That's the reason I compose the songs.
– Gone with Ashes


When I doubt the truth I insisted, Rubbit appeared. Like the agent in Utopia, I was deeply attracted.
– Fallen Dust


In the silence, my heart is etched with the starlight of outside. It's the last fire I keep in the Abyss.
– Corruption and Rust


After the change by Rubbit, my songs often get richer. The performances on the streets are our best memories.
– Fiery Trace


Since the day I was born, I carried the misery of my family. But the fire encouraged me to seek the truth.
– Rang Zone


When Rubbit plays the renewed songs with her guitar, I realize that my songs were shot of one thing--Hope.
– Blood Occult Stick


At first, when Rubbit tried to change my song, I was very reluctant.
– Fate Chain


Maybe people will always be attracted by what they lack. Rubbit is a light compared to my dark past.
– Quiet Night


The idea to compose for the Nine-Day War hovers in my mind and not until I met Rubbit, I got inspiration.
– Flame Tip


The Final Fire will be ignited. Afterwards, the winter will come, and everything will be snowed under.
– Final Carnival


The Nine became the wings of the band. It's like a shooting star that everyone looks up to look at.
– Abyss Brisk Drum


The deep drumbeats are like screams of souls from Abyss. It passes the shock into everyone's heart.
– Wings of Nine Wheels


My pursuit of 'truth' never changed and music is the medium that delivers it to the world.
– Ultimate Truth


Pain and adversity are everywhere in one's life, but they never hinder our hopes for tomorrow.
– Burning Rhythm


The Greenfield Tower is burning; The familiar prelude started, but the fire would no long devour us again.
– Abyss Stress

Retrieved from "https://lovenikki.fandom.com/wiki/Beat_of_Abyss?oldid=180412"
Community content is available under CC-BY-SA unless otherwise noted.