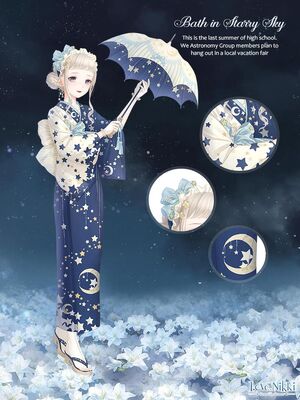 This is the last summer of high school. We Astronomy Group members plan to hang out in a local vacation fair.

Bath in Starry Sky is a Cloud suit that appeared in the Firework Fair Event and can now be obtained through Recipe Crafting.

This is the last summer of high school. We Astronomy Group members plan to hang out in a local vacation fair
– Star Wish

I thought I got no chance to wear the clothes this year, but here is the time
– Star Patten Yukata

This is the third Summer Festival I go with my group members. Thereafter, we will go to different universities
– Heartbeat Firework

I come here just for you, the group head. There should be 5 people here, but nobody showed up yet.
– Star Pattern Geta

Seems I'm the only one here. When I'm thinking of this, I received their messages 'It's time'… You got me!
– Summer of Fate

You seem to receive the same message. We look at each other in surprise. 'Eh, let's hang out together.'
– Starry Sky Earrings

Want some of this? After I swallowed down the shaved ice, I realized that it's an indirect kiss!
– Hold Your Hand

Ahaha, it's like apple sugar! So you laughed at me, but you blushed too. I just cannot hold back my love for you
– Make Up for You

It's the last summer for us. You knew it. Just confess your heart before the firework rises.
– Miss in Summer

This yukata was bought in the first year of high school. I just love the star pattern of it.
– Summer Shooting Star

|The suit tells the story of a member in the Astronomy Group. After graduating high school together with her club members, they planned to go to a local fair for the third time before they part ways for university. She had purchased a starry-themed kimono on her first year but never found the opportunity to wear it until now.

When she arrived first of the five in her group, she received a text saying "It's time"... which she responds with "You got me!". Another person had received the same message and when they looked at each other in surprise, the two decided to just go together. The two ate shaved ice at the fair, and she realized it was an indirect kiss. Her friend laughed while blushing. It was going to be their last summer together. They both knew it—she wanted her friend to confess already before the firework started.

Retrieved from "https://lovenikki.fandom.com/wiki/Bath_in_Starry_Sky?oldid=145629"
Community content is available under CC-BY-SA unless otherwise noted.