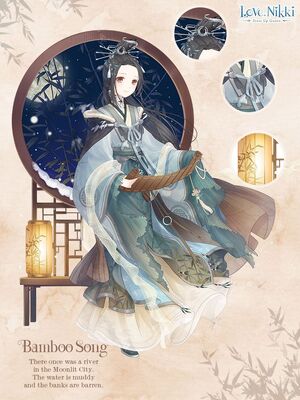 There once was a river in the Moonlit City. The water is muddy and the banks are barren.

Bamboo Song is a Cloud suit that appears in Lucky Bags.

There once was a river in the Moonlit City. The water is muddy and the banks are barren.
– Grief Bamboo Chant

People from both sides pray day and night, hoping their farmland and crops won't be destructed.
– Bamboo Song

People build dams every year but they just get burst by the flood. They almost lost their hope.
– Cloud Bamboo

The bamboo seeds have finally broken through the ground, and become a forest.
– Bamboo Boat

When the rainy season comes, the muddy flood striking the dam. But it survives, so crops are saved.
– Coronet of Bamboo

The river can finally turn from a disaster into resources, bringing the harvest to farmers aside.
– Bamboo Bone

Ever since Moonlit citizens will stick blessing words on the door to wish for the new year.
– Crane Bamboo

Every story has an end, and those who have been away from home will return eventually.
– Misty Candle Holder

Bamboo Song is about a river that once existed in Moonlit City. It was prone to flooding, and the people of Moonlit City were afraid of their farmland and crops being destroyed. Though they tried to contain it using dams, the floods would break through every year.

However, bamboo was planted, and eventually a bamboo forest grew. The rainy season came, but the flood didn't overwhelm the dam this time. The crops were saved, and the river became useful. Ever since, the citizens of Moonlit City put blessings on the door for the new year.

Retrieved from "https://lovenikki.fandom.com/wiki/Bamboo_Song?oldid=145663"
Community content is available under CC-BY-SA unless otherwise noted.