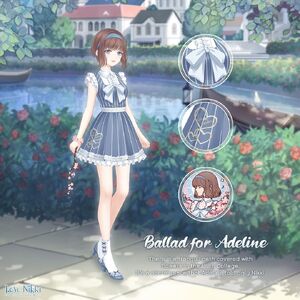 There is a tranquil path covered with flowers in the Lilith College. It's a secret place that Adeline told only Nikki.

Ballad for Adeline is a Lilith suit that could be obtained via Crafting. Its recipes can be purchased from the Store of Starlight. It is the first suit in the series of Stylist's Arena-inspired suits, and is required to craft the other three suits in succession, Sunny's Windowsill, Prime, and Starlight Psalm.

It's said that the badge of Intern Stylist comes from a girl named Adeline and it's also the name of a flower.
– Adeline

Adeline keeps a poem collection that her father sent her when she left home for further study in Lilith Academy.
– Poem for Adeline

The emotion of a maiden is a poem itself. Her gaze at the boy in the library speaks her mind silently.
– Poetic Maiden Heart

There is a tranquil path covered with flowers in the Lilith Academy. It's Adeline's secret base.
– Tranquil Flower Path

When Adeline left hometown, her friends sent her the Adeline Flowers to wish her the best on the road forward.
– Flower Branch Wish

The suit is about a girl named Adeline who went to study at the Lilith academy. Her father sent her a collection of poems, and her friends sent her Adeline Flowers to wish her the best. While she studies there, she finds a secret path covered by flowers, and she uses it as a secret base. She also encounters a boy in the library, and it's implied she has feelings for him as she gazes at him silently. Her likeness was later used for the Intern Stylist badge.

The suit could be named for the French piece of music Ballade pour Adeline, which was composed by Paul de Senneville for his newborn daughter, Adeline. This could potentially be referenced in the suit by the mention of Adeline's father.

Retrieved from "https://lovenikki.fandom.com/wiki/Ballad_for_Adeline?oldid=134040"
Community content is available under CC-BY-SA unless otherwise noted.