Love Nikki-Dress UP Queen! Wiki
Register
Don't have an account?
Sign In
Advertisement
in: Characters, Supporting Characters, Males,
and 5 more

白永羲
Bai Yongxi is a character in Love Nikki. He is the regent of Cloud, mentor to the Cloud Empress, and the leader of the Bai Family, one of the Four Clans of Cloud.

Bai Yongxi has a serious demeanor, with long, straight silver hair and formal dark turquoise clothing. The Empress of Cloud described him as having a "poker face".[19]

Bai Yongxi is not playful or lighthearted like his cousin Bai Jinjin. He believes in hard work and puts a lot of pressure on the Cloud Empress, encouraging her to study hard in order to one day lead the country. In order to simulate how his opponents in the war may act, Bai Yongxi studies chess and plays against himself.[20]

He is a strong proponent of revitalizing Cloud Empire, especially as he believes that the blood curse that brings them peace will be broken one day. They are less technologically advanced as other nations such as Apple and Pigeon, and they still do not have a proper transportation or information system.[21] 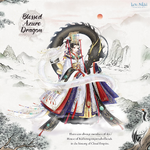 Bai Yongxi was born to the oldest son of Bai Yuandao, the Prime Minister of Cloud, and the oldest daughter of the noble Liu family. He grew up open-minded, with his uncle Liu Mengteng providing a significant influence on him.[16] It was said that he traveled the world with a fan when he was young.[2]

At the age of 12, Bai Yongxi designed the dress Jade Yard. From this point, he became well-known across the Cloud Empire, and it was the common belief that he would rise to become the leader of the Bai clan. It was also expected that he would continue to design clothing that fit the Cloud style.[22]

At the age of 15, Bai Yongxi traveled abroad, taking up the hobbies of literature, art, and flying planes.[23]

At the age of 16, Bai Yongxi became the heir of the Bai clan by winning first place in the contest Top of Cloud.[16]

As the regent of Cloud, Bai Yongxi took a vow to rule Cloud peacefully, especially with the blood curse in mind. He held egalitarian principles in court, and made an effort to weaken the power of the nobles while helping to lift up new ideas from commoners.[16]

Bai Yongxi sometimes tired of staying in Cloud Capital. He thought it was important to explore the world, and would leave studying and history books to travel Miraland.[4]

After the emperor of Cloud passed away, Bai Yongxi helped the Cloud Empress, a member of the royal bloodline, ascend to the throne.[24]

Before Bai Yongxi officially became the clan leader, he had been already managing the affairs of the family for a long time. He struck a deal with the elders of the Bai clan, saying that if he could create a design better than theirs, then they would formally give him the position. They agreed, and Bai Yongxi set to work on his design, though he had trouble perfecting it. However, he realized that he could not compare himself to others, and that he could only be himself. With this in mind, he gave his design to the elders, ousted the current head of the family Qian Zhi, and became the head of the Bai clan.[22][24]

During this year, Bai Yongxi and Zhu Yuxian also played a game of Go together on the eastern coast. Bai Yongxi didn't know Zhu Yuxian's true identity as the king of South Cloud, so he assumed he was just a ranger.[25]

Bai Yongxi attended the White Blossom Banquet in order to buy clothes for his cousin Bai Jinjin.[17] Though he was not invited, he took Jia Yuanbao's invitation after giving him Federal Police Badge.[8] During the auction, he paid 1 million

for a cheongsam.[26] He witnessed Reid asking Kimi, disguised as a man, to dance, but this did not faze him.[27] He left the banquet partway through and called somebody on his phone, telling them to "investigate Mercury Group". The light went out almost immediately afterwards, signaling the theft of the White Blossom.[27]

He went to Lu Yinian's restaurant in Welton and provoked Nikki and her friends by questioning Zhong Lizi's ability as a general.[9] However, after finding out they were friends of Bai Jinjin, he warmed up to them and asked if they could have a drink together. He thanked them for helping Bai Jinjin and told them that she was kept at home now due to running away. After talking to them, he left to return to Cloud for the War of Cloud Summit,[17] carrying a new Apple-styled outfit and a secret letter in his suitcase.[27]

Sometime after Nidhogg's takeover of Cloud City,[21] Bai Yongxi was invited to play a game of Go on Mount Tai Chi by Zhu Yuxian, and left the Bai Palace without telling anyone.[10]

Zhu Yuxian was surprised to see him there, but regardless, they began a game of Go in the ruined temple.[28] There, they discussed the future of Cloud,[29] the Blood Curse,[21] and their encounter three years previously.[25] Though Zhu Yuxian had criticisms for how Bai Yongxi was running the empire,[29] he believed that he wouldn't let another tragedy like the one that had happened in Cloud City happen again.[25]

During the game, a massive thunderstorm began, but the two men played on. Bai Yongxi was near to losing, but as he set down his last piece, Zhu Yuxian declared him the winner and got up to leave. Right as Zhu Yuxian's figure disappeared, the sky cleared up and the sun appeared again.[30]

While Bai Yongxi and Zhu Yuxian were on the mountain, thirteen cities along the southern border of Cloud rebelled.[1] They managed to advance to the gates of the city in only three days and breached the city walls the night before he returned, emptying the Phoenix Clan's palace.[11] Since he had disappeared, everybody began to look for him, and Yue Qianshuang and Ming Shuiyuan even came to Cloud Capital once they heard about the situation.[1]

When Bai Yongxi got back to the palace, he went to read the reports on the situation as soon as he found out what had happened. However, the Cloud Empress asked him to tell her a bedtime story first, and he chose to tell her the story of his first game of Go with Zhu Yuxian three years previously.[11]

Bai Yongxi and Zhu Yuxian met up again at some point at Wenying Hall to discuss the state of the war. The two disagreed over whose fault the ongoing battle was, and discussed the true identity of the Cloud Empress, suggesting that she was not the actual empress. The encounter ended with a deal and Zhu Yuxian withdrawing his men from the battle.[13]

Though he believes she is naive, Bai Yongxi cares a great deal for Bai Jinjin, going to Welton to bid on Apple-style clothes while she is kept at home by her father. He thanks Nikki and her friends for taking care of Bai Jinjin while she ran away from home.[17]

Bai Yongxi also gave her advice based on his own experience. One piece of advice was sent on a postcard to her while he was traveling, telling her that she could never know the world without experiencing it herself.[31]

Bai Yongxi didn't like Zhong Lizi for his relationship with Bai Jinjin. When Zhong Lizi become the general and reclaimed Cloud City from league Tyre, Bai Yongxi still doubted him and questioning his abilities as a general.

However, Bai Yongxi doesn't seems to hold an animosity towards Zhong Lizi and respect his will in becoming successful to marry Bai Jinjin. He seems to prefer Zhong Lizi over Zhu Yuxian when both propose Bai Jinjin and states that "Even that weak scholar is a hundred folds better than you [Zhu Yuxian].".[25]

Bai Yongxi was the Empress's older brother figure and teacher. He instructed her on how to run the country from a young age,[19] and gave her words to recite.[32] He never spoke to her about the war occurring in Cloud.[32]

He taught the Empress to play chess, leading her to become an excellent chess player, but never played against her directly. One day the Empress had difficulty with a chess game, leading her search all of the books on chess for the answer, but she couldn't find the answer. Only after watching Bai Yongxi play a game of chess against himself did she understand.[20]

Zhu Yuxian is Bai Yongxi's political opponent[13] as well as his old friend. Their first met was in South Cloud and at that time, Bai Yongxi has play a game of Go with him but unaware that the person whom he met was South King Zhu Yuxian and just assume that he was a mere ranger.

As one of the head of Four Clans of Cloud Empire, they have some formal and respectful relationship and interactions towards one another in public. However, they didn't shared the same ideals as Bai Yongxi wants to protect Cloud while Zhu Yuxian wants to takeover Cloud and tear down the Empire.

Bai Yongxi is well aware of his conspiracies and motives towards Cloud and personally didn't like him when he propose Bai Jinjin. And state that the Bai clan don't wanted to have him as a relative and he don't wanted his sister to marry or engaged to someone like Zhu Yuxian.

When the league Tyre takeover Cloud Cty along with rebelion in the South Cloud rises and when the Zhu clan falls of power, Bai Yongxi is the only one who aware that Zhu Yuxian was behind all of this and Zhu Yuxian state that "all these tricks may fool the others, but not you.". When they meet and play a game of Go on mount Tai Chi, Bai Yongxi directly pointed out that and state that Zhu Yuxian will be executed for treason. Bai Yongxi also talk about Zhu Yuxian's great achivements in the past and wonder why now he chosen to destroy everything he has created. When Bai Yongxi was near losing, Zhu Yuxian declared the game has over with Bai Yongxi is the winner and left.

This could maybe hinted that even if Bai Yongxi has won the game, it was because Zhu Yuxian have mercy and let him win. But the real winner till the end was still Zhu Yuxian.

The two shares an equal yet respectful relationship as one of the head of Four Clans of Cloud Empire. Bai Yongxi refers to Ming Shuiyuan as a swordwoman who's protecting North Cloud when telling stories for Cloud Empress and Ming Shuiyuan refers to him as "King Xi" and appreciate his worries as well the warnings when she returns to the North Cloud to investigate the smuggling. Both shared the same ideals and purpose of their clan in protecting Cloud.

The two of them share the same view towards the situations of Cloud Empire. They are also two of the few people who know the true identity of Zhan Qiuming as Zhu Yuxian in disguise, and they are both aware of his conspiracies and motive towards Cloud. Thus, they view him as one of the biggest threats inside Cloud Empire.

Bai Yongxi is also one of the few people who didn't doubt Ming Shuiyuan's loyalty to Cloud Empire when she led her mech army to conquer South Cloud. Like Zhu Yuxian, he is aware that despite what will happens, she would do anything to protect Cloud Empire.

Bai Yongxi in the War Among Four Gods (四神之战) event

Bai Yongxi behind Zhu Yuxian in the Art of War Event