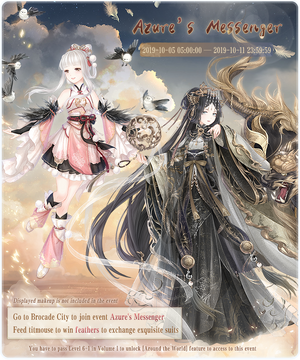 The Azure's Messenger event was an event that ran from October 5th to October 11th, 2019. It involved playing through the story and feeding the birds in order to gain the suits Blessed Qilin and World Watcher.

to feed the birds and obtain 5

can be used to exchange for the suits.

This event uses the Around the World feature; the player must have passed V1: 6-1 Challenge Flower Field in order to unlock the feature and complete the event.

From the mailbox, each user can obtain 3

(Site Tickets), which are used to enter specific sites in the Around the World feature.

In Around the World, the player must enter Jinlin Palace within Brocade City, Cloud Empire. This will unlock an encounter, Azure's Messenger I, and award the player 5

Once they have finished traveling in Jinlin Palace, the player must enter Celestial Garden (also within Brocade City). After the encounter with Cali, Azure's Messenger II, they must take a picture with her. This encounter also awards 5

After traveling in the Celestial Garden, the player must return to Jinlin Palace for the third and final encounter, Azure's Messenger III. The player will then be awarded with 10

. They can also choose to exchange for more

if they wish, using

"Legend has it that Goddess Azure blesses people through long-tail tit!"

Nikki will attend the prayer ritual in Brocade City but the ritual is still in preparation. So why not go to Celestial [sic]

In Celestial Garden, they meet Cali and long-tail tit. The ritual is about to start. Let's go back to Jinlin Palace.

After the prayer ritual, Nikki and Cali go to watch a show about the story of Goddess Azure.

Love Nikki-Dress Up Queen Azure's Messenger
Add a photo to this gallery
Retrieved from "https://lovenikki.fandom.com/wiki/Azure%27s_Messenger?oldid=107476"
Community content is available under CC-BY-SA unless otherwise noted.