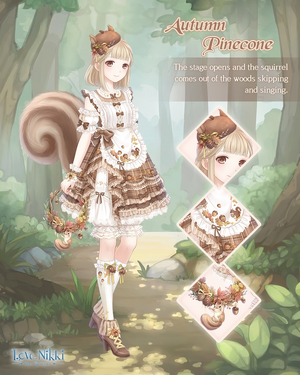 The stage opens and the squirrel comes out of the woods skipping and singing.

Today, the small theatre is busy preparing for the opening of the long rehearsed musical 'Squirrel Bobby'.
– Squirrel Bobby Pin

The stage opens and Bobby Squirrel comes out of the woods skipping and singing and the whole room watched.
– Pine Cone Checkers

Nikki is in costume on the stage with Momo dressed as a sparrow clapping to the beat of Bobby Squirrel's song.
– Pine Cone Sleeve

Autumn sun makes star shadows from the tree crevices, and shines on the pinecones. This is Bobby's favorite food!
– Twinkling Autumn Day

It's not clear whether it's a bow or a cat ears. Even a witch can't escape the fashion trends!
– Pine Cone Velvet

Bobby is a squirrel who sings. If there are no birds in the morning, it must be because they went to listen to him!
– Ear Sprout Beret

Momo tried to hang on the wreath like a squirrel but broke the props and was forced to repair them before the show.
– Squirrel Garland

Nikki is helping the actors. They think her pink hair is very suitable for a role in the play - Miss Begonia.
– Nut Cream Puff

Bobby has a good voice. When he sings, his fluffy tail bounces to the rhythm and wins the hearts of the audience.
– Soft and Luxuriant

The suit describes a musical called 'Squirrel Bobby'. It is about a squirrel named Bobby, who lives in the forest and sings. His favorite food is pinecones, and he loves the autumn. Nikki and Momo also participated in the play, clapping along to Bobby's song.

Nikki was selected to play the role of Miss Begonia due to her pink hair. Momo dressed up as a sparrow. He tried to hang on a wreath prop like a squirrel, but he ended up breaking it and had to repair it before the show.

Retrieved from "https://lovenikki.fandom.com/wiki/Autumn_Pinecone?oldid=142843"
Community content is available under CC-BY-SA unless otherwise noted.