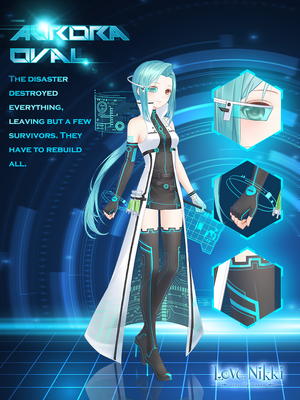 The disaster destroyed everything, leaving but a few survivors. They have to rebuild it all.

Aurora Oval is a Ruin suit that can be obtained from reconstruction. Most parts also require evolution. The suit is also customizable.

Look through the chronicles of Miraland, you'll see little record about the Ruin Island in the past.
– Aurora Island

It's a lonely island, without rich resources, or vast lands.
– Dark Nebula

To optimize the use of limited resources, the people on the island never cease thinking.
– Reverse Science

Life is full of uncertainties. But as time goes on, rules will always appear.
– Darkness

Science is charming. Physics, chemistry, biology... The place is not a ruin anymore.
– Aurora Gloves

Everything seems to be getting better, but it failed at last. The research became a disaster.
– Aurora Oval

Island has to face a lot of disasters, even a tsunami can destroy a civilization.
– Dark Nebula-Rare

How to respond to disasters, this question has been troubling the scientists on the island.
– Reverse Science-Rare

Development has to be sustainable. People finally found an answer, Decompose-Recompose.
– Darkness-Rare

Decompose-Recompose was such a big news that all scientists devote themselves to the research.
– Aurora Gloves-Rare

Look through the history, you'll learn that the Ruin Island was once truly a ruin.
– Aurora Island-Epic

The disaster destroyed everything, leaving but a few survivors. They have to rebuild all.
– Dark Nebula-Epic

How to survive becomes the biggest problem. Then, a ship arrived, like the light in the darkness.
– Reverse Science-Epic

With the help from main land people, they quickly rebuild the Ruin Island. But what's gone is gone.
– Darkness-Epic

Nowadays, the achievements of scientists are not only shown in science, but also in fashion.
– Phantom Technology

As time goes, the past was forgotten gradually. Decompose and Recompose was no longer remembered.
– Aurora Gloves-Epic

The scientific and technical aesthetics fills all the corners of Ruin Island.
– Aurora Mirror

You can hardly imagine that once a small island now becomes one of seven nations of Miraland.
– Aurora Oval-Rare

The world moves on, and today's Ruin Island is much more than that in history.
– Aurora Island-Purple

Aurora is a phenomenon but also her name. She hopes to bring all the old skills back.
– Dark Nebula-Yellow

Even the biggest difficulty can be broken down into small steps. Aurora is making her steps.
– Darkness-Yellow

Ancient skills were successfully revealed, but they are not enough for new problems.
– Aurora Mirror-Yellow

All the scientists now focus on Arora technology. It will benefit the whole land.
– Aurora Gloves-Yellow

After arduous works day and night, the technology of Decompose and Recompose was back.
– Aurora Oval-Yellow

The suit gives a great deal of information about Ruin Island's history and the history of Decomposition and Reconstruction. The base item descriptions explain the background of Ruin Island: it is an obscure and lonely island without natural resources. The people of the island put their heads together in order to come up with a way to succeed despite their limited resources.

The rare evolution explains that Ruin Island has faced many natural disasters due to their location, such as tsunamis. The people of Ruin finally came up with the answer, which was decomposing and recomposing (reconstruction). The scientists of the island dedicated themselves to the technology with full force.

The epic evolution describes how a disaster hit Ruin and destroyed nearly everything, with only a few survivors who had to rebuild everything from nothing. People from the mainland of Miraland helped them to rebuild, but the past was forgotten, including the systems of Decompose and Recompose.

The recolored version describes how Ruin thrives now, but the scientist Aurora hopes to bring back older skills. She has to rebuild the technology from scratch, but finally Decompose and Recompose are back and able to be used due to her progress.

The suit and its recolor

Retrieved from "https://lovenikki.fandom.com/wiki/Aurora_Oval?oldid=145718"
Community content is available under CC-BY-SA unless otherwise noted.