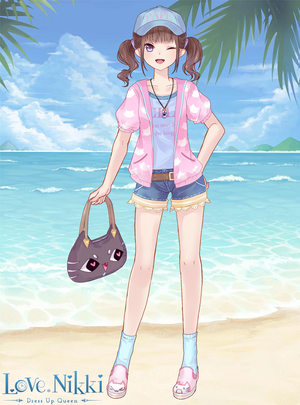 Aron is a character in Love Nikki. She is an athletically-minded girl and one of the first characters that Nikki meets in Miraland.

Aron has fair skin and dark purple eyes. She wears her hair in two short identical pigtails. She has straight bangs covering her entire forehead.

Aron usually wears a pink cat shirt with a blue shirt underneath, revealing the words "GILA", with smaller text underneath (see Trivia). She has a paw print pendant and wears a pair of denim shorts with yellow frills. She carries around a cat bag and wears two purple rubber bands. She wears a blue hat reading the word "PAPE" in pink.

Aron is a tomboyish teenage girl who's always cheerful and full of life. She also loves competing against people in either styling or sporty activities, as proved when one of the first things she does in the whole game is stopping her morning jog to ask Nikki for a duel.

One day when Aron was at school, her teacher introduced a new transfer student that immediately reminded Aron of blueberry. Coincidentally, he was assigned to share a desk with her. At the playground that day, Aron noticed that the boy (who she had nicknamed Blueberry in her head) wasn't athletic at all, making him the first boy she had ever met that was bad at sports.[1]

Aron, who was better at sports, was struggling with a question one day, and "Blueberry" offered her help. They became friends, even though they were opposites. Aron was in awe of just how bad at running Blueberry really was, marveling that it was a miracle he was still alive. She hoped that he could get better so that he could pass his PE (physical education) test.[1]

Time went by, and "Blueberry" learned about Aron's nickname for him. He gave her her own matching nickname, "Lemon". Once she finally felt confident enough, Aron asked him why he was so bad at sports. Hesitantly, he revealed that he broke his front teeth when he was three, which was why he was so bad. She vowed that she would show him sports could be fun, and Blueberry became less weak as he ran by the river and played badminton. In turn, he helped Aron with her schoolwork, and she was astonished when her math test came back with full marks.[1]

Aron introduced herself to Nikki and Momo after they arrived to Wheat Field, and she decided to compete with her in a styling battle.[2]

Aron was classmates with a transfer student in her class, who she nicknamed Blueberry. Though they were total opposites, with him being terrible at sports and her struggling in school, they still became close friends and helped each other grow and conquer their fears.[1]

Retrieved from "https://lovenikki.fandom.com/wiki/Aron?oldid=143572"
Community content is available under CC-BY-SA unless otherwise noted.